What is Serial Transmission?

Following are the two main reasons for serial transmission−

It can use serial transmission. The sender and receiver must include a small amount of hardware that changes data from the parallel form used in the machine to the serial structure used on the wire.

The figure given below shows the configuration− 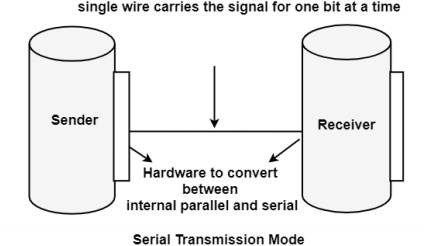 The hardware needed to convert data between an internal parallel form and a serial form can be straightforward or complex, depending on the type of serial communication mechanism. In the simplest case, a single chip that is known as a Universal Asynchronous Receiver and Transmitter (UART), performs the conversion. A related chip, Universal Synchronous-Asynchronous Receiver and Transmitter (USART) handles conversion for synchronous networks.

There are three types of Serial Transmission which are as follows−