What is Bipolar Encoding?

Assume the first 1 bit is described by positive amplitude. A negative voltage means the second 1 bit; the positive amplitude explains the third 1 bit. This rotation can also appear even when the 1 bits are not successive.

There are three types of Bipolar which are as follows −

In the Bipolar AMI encoding scheme, 0 bit is defined by zero levels and 1 bit is described by rotating positive and negative voltages. 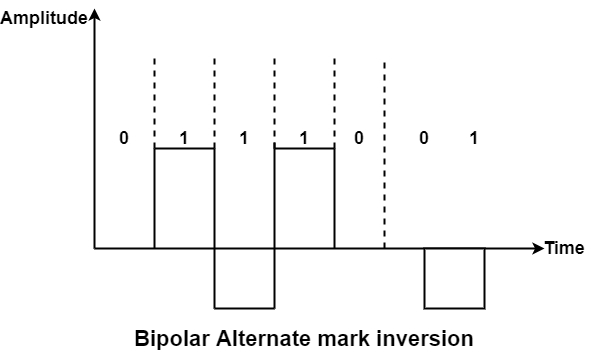 A variation of bipolar AMI is also known as pseudo ternary because binary 0 alternates between +ve and –ve voltages. By reversing each appearance of a 1, bipolar AMI achieves two things, the DC component is zero, and the second stay synchronized. Still, long strings of the synchronization method are not ensured.

B8ZS stands for Bipolar 8-Zero Substitution. This is identical to bipolar AMI. Bipolar AMI changes poles with each '1' it encounters. But the signal does not modify during a string of 0’s. So, where synchronization is minimum in AMI.

But in B8ZS, wherever eight or more consecutive 0’s are encountered in the DataStream, the design depends on the polarity of the previous 1 is the same (that is occurring just before 8 0’s) as shown in the figure −

So in blank of (8) zero’s, there are two cases either the polarity of 1 before zero is +ve or –ve then the solution of both cases will be as follows −

An example is shown for every four consecutive zero’s pattern with two cases.

Case 1 − If the number of 1’s since the final substitution is odd.

Case 2: If the number of 1’s since the final substitution is even.