What are thread libraries?

A thread is a lightweight of process and is a basic unit of CPU utilization which consists of a program counter, a stack, and a set of registers.

Given below is the structure of thread in a process − 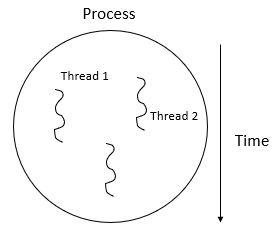 A process has a single thread of control where one program can counter and one sequence of instructions is carried out at any given time. Dividing an application or a program into multiple sequential threads that run in quasi-parallel, the programming model becomes simpler.

Thread has the ability to share an address space and all of its data among themselves. This ability is essential for some specific applications.

A thread library provides the programmer with an Application program interface for creating and managing thread.

There are two primary ways of implementing thread library, which are as follows −

Invoking a function in the application program interface for the library typically results in a system call to the kernel.

The main thread libraries which are used are given below −