The transmission Control Protocol (TCP) is one of the most important protocols of Internet Protocols suite. It is most widely used protocol for data transmission in communication network such as internet.

The length of TCP header is minimum 20 bytes long and maximum 60 bytes.

TCP communication between two remote hosts is done by means of port numbers (TSAPs). Ports numbers can range from 0 – 65535 which are divided as:

TCP communication works in Server/Client model. The client initiates the connection and the server either accepts or rejects it. Three-way handshaking is used for connection management. 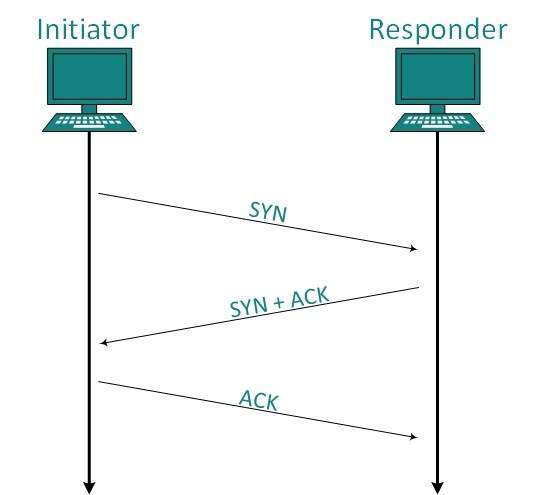 Either of server and client can send TCP segment with FIN flag set to 1. When the receiving end responds it back by ACKnowledging FIN, that direction of TCP communication is closed and connection is released.

TCP uses the concept of window size to accommodate the need of Bandwidth management. Window size tells the sender at the remote end, the number of data byte segments the receiver at this end can receive. TCP uses slow start phase by using window size 1 and increases the window size exponentially after each successful communication.

If an acknowledgement is missed, i.e. data lost in transit network or it received NACK, then the window size is reduced to half and slow start phase starts again.

The technique to combine two or more data streams in one session is called Multiplexing. When a TCP client initializes a connection with Server, it always refers to a well-defined port number which indicates the application process. The client itself uses a randomly generated port number from private port number pools.

Using TCP Multiplexing, a client can communicate with a number of different application process in a single session. For example, a client requests a web page which in turn contains different types of data (HTTP, SMTP, FTP etc.) the TCP session timeout is increased and the session is kept open for longer time so that the three-way handshake overhead can be avoided.

When large amount of data is fed to system which is not capable of handling it, congestion occurs. TCP controls congestion by means of Window mechanism. TCP sets a window size telling the other end how much data segment to send. TCP may use three algorithms for congestion control:

When a TCP Server crashes mid-way communication and re-starts its process it sends TPDU broadcast to all its hosts. The hosts can then send the last data segment which was never unacknowledged and carry onwards.