Application layer is the top most layer in OSI and TCP/IP layered model. This layer exists in both layered Models because of its significance, of interacting with user and user applications. This layer is for applications which are involved in communication system.

A user may or may not directly interacts with the applications. Application layer is where the actual communication is initiated and reflects. Because this layer is on the top of the layer stack, it does not serve any other layers. Application layer takes the help of Transport and all layers below it to communicate or transfer its data to the remote host. 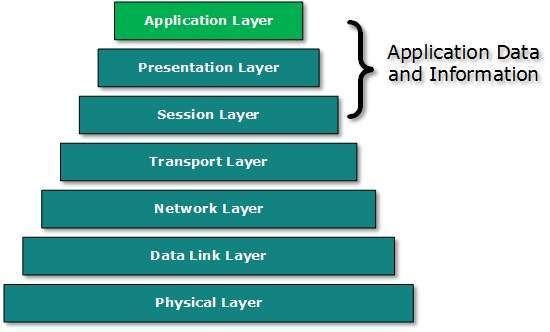 There’is an ambiguity in understanding Application Layer and its protocol. Not every user application can be put into Application Layer. except those applications which interact with the communication system. For example, designing software or text-editor cannot be considered as application layer programs.

On the other hand, when we use a Web Browser, which is actually using Hyper Text Transfer Protocol (HTTP) to interact with the network. HTTP is Application Layer protocol.

Another example is File Transfer Protocol, which helps a user to transfer text based or binary files across the network. A user can use this protocol in either GUI based software like FileZilla or CuteFTP and the same user can use FTP in Command Line mode.

Hence, irrespective of which software you use, it is the protocol which is considered at Application Layer used by that software. DNS is a protocol which helps user application protocols such as HTTP to accomplish its work.