What are the differences between Thunderbolt and USB-C?

Let us understand the concepts of Thunderbolt and USB-C before learning the differences between them.

It is an industry-standard connector for transmitting the two information and force on a solitary link. It includes another, littler connector shape that is reversible so it's simpler to connect. USB-C links can convey essentially more force, so they can be utilized to charge bigger gadgets like PCs.

Most electronic gadgets, for example, PCs and other PC gear will incorporate at any rate one standard USB Type-A port, so any reasonable person would agree that USB connectors have been around for quite a while. Littler gadgets like cell phones, power banks, and outer hard drives will as a rule include either the little USB Type B connectors or miniaturized scale USB connectors to spare important space.

Out of nowhere, USB Type C connectors or USB-C as they're presently being called are being supported as a one-size-fits-all answer for charging and moving information between gadgets.

USB-C is the new rising standard for force and information, and will get omnipresent over most gadgets. It will likewise offer ascent to a scope of connectors for different kinds of connectors as gadgets become slimmer and progressively easier with regards to power and information ports.

Given below is the image of USB-C: 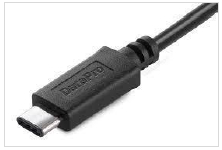 Thunderbolt interface is a specific type of hardware interface developed by intel in collaboration with Apple Inc. This interface is used for connecting hardware external peripherals and devices to a computer.

The advantages of thunderbolt are explained below −

It supports USB-C and other peripherals.

Given below is the image of thunderbolt: 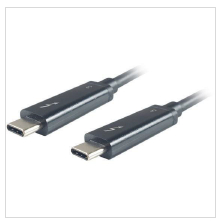 The major differences between Thunderbolt and USB-C are as follows −