Toric lens comes with different focal lengths and optical power in 2 orientations that are perpendicular to each other. One surface of the lens has a shape like a cap from the torus, and the other one has a spherical shape. This toric lens behaves just like the combination of cylindrical and spherical lenses. The lenses that are made of RGP are more delicate than other lenses. The toric lenses that have markings of the six o’clock position are with asymmetrical dynamic stabilization and are vital for thinner and larger peripheral zone to be oriented for optimal interaction of lids.

What is a Toric lens?

Toric lenses can be of both quality hard and soft and are also made of Rigid Gas Permeable. This lens is often used in vision correction and can also be used in daily wear glasses. Soft toric lenses are very comfortable and can be managed easily but they need special care in fitting so that it remains in their place and does not create irritation in the eyes (Bogaert et al. 2018). The greatest radius of curvature of this toric lens surface is R+r and it corresponds to small refractive power, S, that can be written in the form: S = n-1/ R+r.

The lens is the combination of a cylindrical lens having the power s-S and a spherical lens having the political power. In the toric lens when the rays of lights pass along the axis of the revolution of torus, the light gets refracted with respect to the greatest curvature radius (Ferreira et al. 2020). The light rays then pass through the axis of the revolution of torus and get refracted to the small radius of curvature. This phenomenon results in 2 different powers of refraction that are perpendicular orientations. The refractive power that is in the intermediate orientation gets changed from smallest value and vice-versa and helps in the compensation of astigmatic irregularity of eyes. 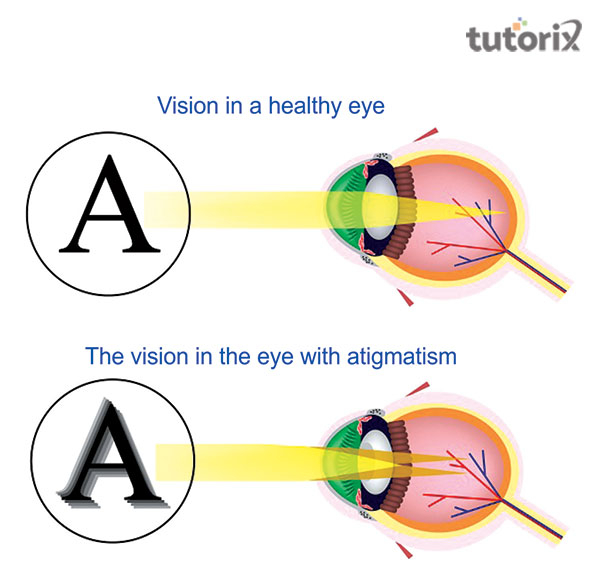 On the basis of the torus, these lenses are made. The torus is the spatial body that results from the rotation of circle and has the radius r. Around the axis, at a certain distance R a torus ring is formed at the centre of the circle. The torus rings are formed if R>r, a horn torus is formed if R = r, and if R 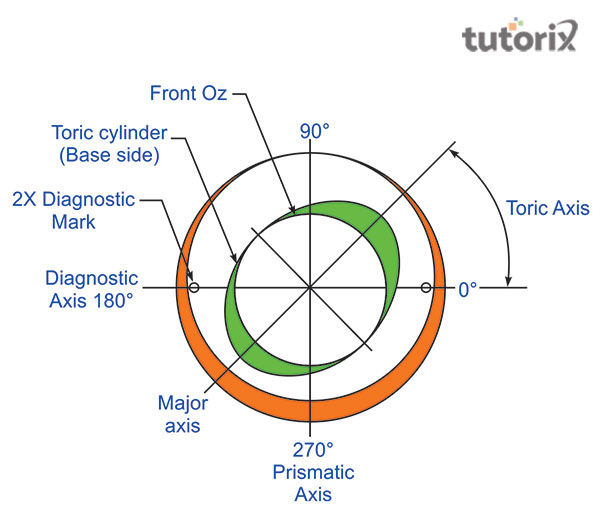 The toric lens that is soft usually has markings on them at a particular point of reference and this helps in determining the degree of rotation when it is fitted in the eye. These markings can be formed from laser traces, engraved dots, scribe lines, or ink dots. The markings of the lens never represent cylindrical axis (Kern et al. 2018). The lens markings can either be at the six o’clock position of toric lens or can also be in the horizontal lens meridian at the three and nine o’clock position.

Toric lens is a special type of lens that is often used for eyeglasses. This lens has 2 different focal lengths and optical powers in orientation which remain perpendicular to one another. Like all spherical lenses that are used for contact lenses, a toric lens is also made of either rigid plastic for rigid gas permeable lenses or soft gel-like plastic to make soft lenses. These lenses are made, with respect to the torus. The torus is the spatial body that results from the rotation of circle and has the radius r. One of the surfaces of this lens has cap-shaped while the other surface looks spherical shaped.

Q1. What do you mean by toric lens?

The toric lens is the special type of lens often used as the contact lens, the Intraocular lens, and also for eyeglasses. It mainly works with the shape of eyes and helps to refract light and probation of distorted or blurred vision.

Q2. Why fitting of toric lens are critical?

Q3. What are the main types of Toric lens?

There are several types of Toric IOLs available that are being used for vision correction. The main type of toric IOLs are front-toric IOL, bi-toric IOL, and back-toric IOL.

Q4. What are the disadvantages of using toric contact lens?

Downsides of the toric lens include lens’ mobility in the eyes and can cause vision inconsistent or blurry. These lenses are also much more expensive than regular contact lenses.