In the object-oriented approach, the focus is on capturing the structure and behavior of information systems into small modules that combines both data and process. The main aim of Object Oriented Design (OOD) is to improve the quality and productivity of system analysis and design by making it more usable.

In analysis phase, OO models are used to fill the gap between problem and solution. It performs well in situation where systems are undergoing continuous design, adaption, and maintenance. It identifies the objects in problem domain, classifying them in terms of data and behavior.

The OO model is beneficial in the following ways −

Let us go through the characteristics of OO System −

An object-oriented system comes with several great features which are discussed below.

Encapsulation is a process of information hiding. It is simply the combination of process and data into a single entity. Data of an object is hidden from the rest of the system and available only through the services of the class. It allows improvement or modification of methods used by objects without affecting other parts of a system.

It is a process of taking or selecting necessary method and attributes to specify the object. It focuses on essential characteristics of an object relative to perspective of user.

All the classes in the system are related with each other. The objects do not exist in isolation, they exist in relationship with other objects.

There are three types of object relationships −

Inheritance is a great feature that allows to create sub-classes from an existing class by inheriting the attributes and/or operations of existing classes.

Polymorphism is the ability to take on many different forms. It applies to both objects and operations. A polymorphic object is one who true type hides within a super or parent class.

UML is a visual language that lets you to model processes, software, and systems to express the design of system architecture. It is a standard language for designing and documenting a system in an object oriented manner that allow technical architects to communicate with developer.

It is defined as set of specifications created and distributed by Object Management Group. UML is extensible and scalable.

The objective of UML is to provide a common vocabulary of object-oriented terms and diagramming techniques that is rich enough to model any systems development project from analysis through implementation.

Example of UML Notation for class 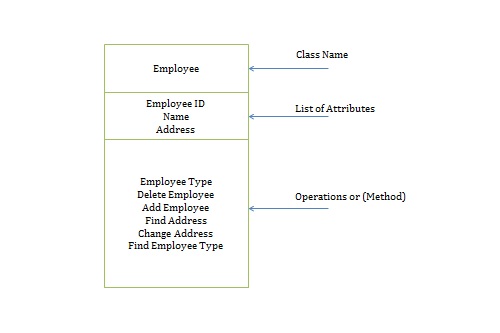 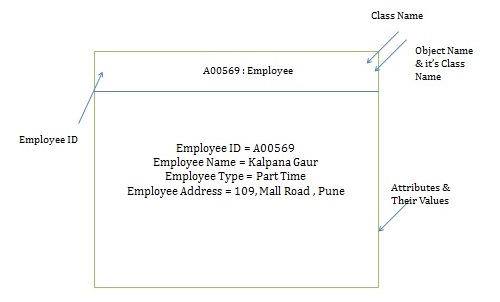 The following operations are performed on the objects −

UML is quite useful for the following purposes −

Static models show the structural characteristics of a system, describe its system structure, and emphasize on the parts that make up the system.

Dynamic models show the behavioral characteristics of a system, i.e., how the system behaves in response to external events.

It consists of three macro processes − 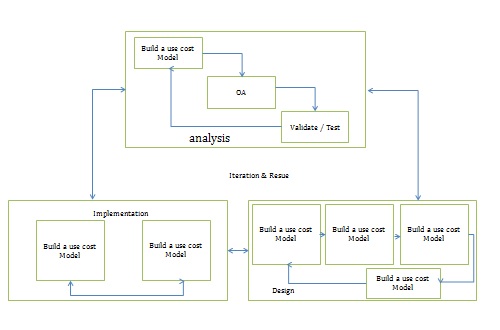 It also includes identifying the classes and their relationships to the other classes in the problem domain, that make up an application.

The objective of this phase is to design and refine the classes, attributes, methods, and structures that are identified during the analysis phase, user interface, and data access. This phase also identifies and defines the additional classes or objects that support implementation of the requirement.

Prototyping enables to fully understand how easy or difficult it will be to implement some of the features of the system.

It can also give users a chance to comment on the usability and usefulness of the design. It can further define a use-case and make use-case modeling much easier.

CODD is an industrialized approach to the software development process using various range of technologies like CASE tools. Application development moves from custom development to assembly of pre-built, pre-tested, reusable software components that operate with each other. A CBD developer can assemble components to construct a complete software system.

RAD is a set of tools and techniques that can be used to build an application faster than typically possible with traditional methods. It does not replace SDLC but complements it, since it focuses more on process description and can be combined perfectly with the object oriented approach.

Its task is to build the application quickly and incrementally implement the user requirements design through tools such as visual basic, power builder, etc.

Software development and all of its activities including testing are an iterative process. Therefore, it can be a costly affair if we wait to test a product only after its complete development. Here incremental testing comes into picture wherein the product is tested during various stages of its development.