Suggest separation technique(s) one would need to employ to separate the following mixtures.
(a) Mercury and water
(b) Potassium chloride and ammonium chloride
(c) Common salt, water and sand
(d) Kerosene oil, water and salt 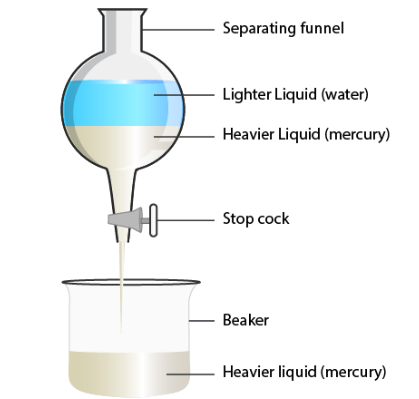 [Extra information:
Decantation is the process of separation of liquid from solid and other immiscible (non-mixing) liquids, by removing the liquid layer at the top from the layer below.
Two immiscible liquids are separated by using a separating funnel. The mixture of mercury and water forms two separate layer because they are completely insoluble in each other.
Sublimation is the transition of a substance directly from the solid to the gas state, without passing through the liquid state.
Evaporation is the process of turning from a liquid state to vapour on heating.]