The use of SDP with SIP is given in the SDP offer answer RFC 3264. The default message body type in SIP is application/sdp.

A typical SIP use of SDP includes the following fields: version, origin, subject, time, connection, and one or more media and attribute.

The offer/answer specification, RFC 3264, recommends that an attribute containing a = rtpmap: be used for each media field. A media stream is declined by setting the port number to zero for the corresponding media field in the SDP response.

In the following example, the caller Tesla wants to set up an audio and video call with two possible audio codecs and a video codec in the SDP carried in the initial INVITE −

The codecs are referenced by the RTP/AVP profile numbers 97, 98.

If this audio-only call is not acceptable, then Tom would send an ACK then a BYE to cancel the call. Otherwise, the audio session would be established and RTP packets exchanged.

As this example illustrates, unless the number and order of media fields is maintained, the calling party would not know for certain which media sessions were being accepted and declined by the called party.

The offer/answer rules are summarized in the following sections.

Rules for Generating an Offer

An SDP offer must include all required SDP fields (this includes v=, o=, s=, c=,and t=). These are mandatory fields in SDP.

It usually includes a media field (m=) but it does not have to. The media lines contain all codecs listed in preference order. The only exception to this is if the endpoint supports a huge number of codecs, the most likely to be accepted or most preferred should be listed. Different media types include audio, video, text, MSRP, BFCP, and so forth.

Rules for Generating an Answer

Rules for Modifying a Session

Either party can initiate another offer/answer exchange to modify a session. When a session is modified, the following rules must be followed −

One party in a call can temporarily place the other on hold. This is done by sending an INVITE with an identical SDP to that of the original INVITE but with a = sendonly attribute present.

The call is made active again by sending another INVITE with the a = sendrecv attribute present. The following illustration shows the call flow of a call hold. 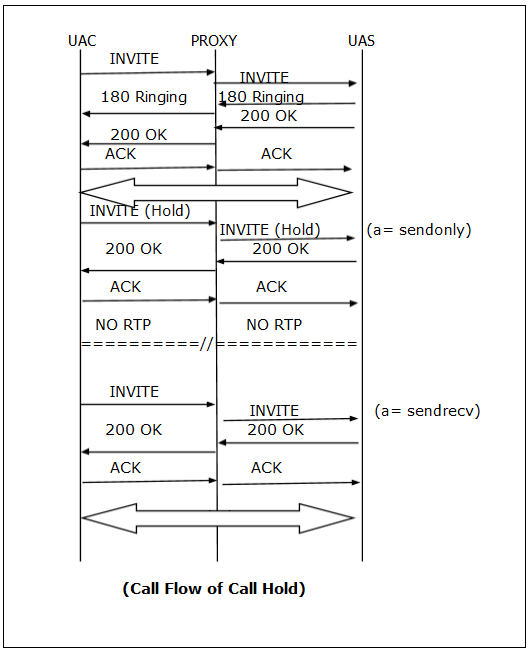