The following is a request in SAP System Landscape −

When a project is implemented, at the initial stages, a sandbox server is used where all the customization, configuration is performed.

Next is to save the configuration in development server and saved in workbench requests and this has to be transported to Production server.

You can consider it as the final or the most refined stage where the work is done when project is in production/go live. All the changes that are required by the client are performed in the DEV environment and later, the request is transported to production.

The image given below shows 3-tier architecture of the SAP system. The presentation layer is the topmost one. This contains the device/application to control the SAP system. This can include mobile devices, end user systems or SAP GUI or web browser based client. 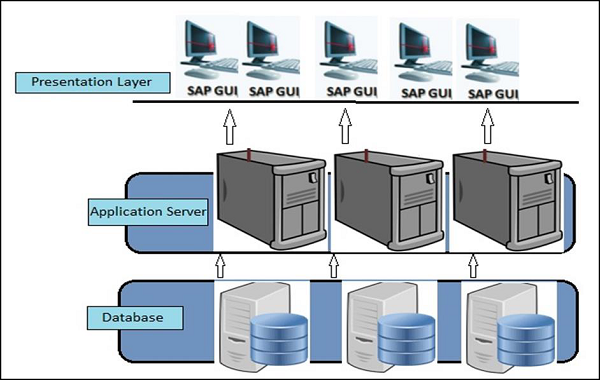 The presentation layer communicates with the application server to perform all the processing and which is known as brains of an SAP system.

An application server consists of multiple instances and communicates with the database layer of the three-tier architecture.

The bottom layer is called the database layer. This is responsible to store all the data. The database of SAP system is kept on a separate server for performance and security reasons.

The presentation layer consists of different components for ABAP and JAVA that enables the communication and processing of data in SAP system.

The key components of the presentation layer include the following −

Message Server − This is used to manage communication between distributed dispatchers in the ABAP system.

Dispatcher − This is used to distribute the requests to the work processes.

Memory Pipes − This is used to manage communication between ICM and ABAP work processes.

Enqueue Server − This is used to handle logical locks set by the executed Java application program.

Java Dispatcher − This is responsible to receive the client requests via presentation layer and forward to the server process.

Gateway − This is used to manage communication between SAP system and external systems.