In data communications and networking, orthogonal frequency-division multiplexing (OFDM) is a method of digital data modulation, whereby a single stream of data is divided into several separate sub-streams for transmission via multiple channels.

OFDM uses the principle of frequency division multiplexing (FDM), where the available bandwidth is divided into a set of sub-streams having separate frequency bands. OFDM was introduced in 1966 by Chang at Bell Labs and was improved by Weinstein and Ebert in 1971.

When any signal is modulated by the sender, its sidebands spread out either side. A receiver can successfully demodulate the data only if it receives the whole signal. In case of FDM, guard bands are inserted so that interference between the signals, resulting in cross-talks, does not occur. However, since orthogonal signals are used in OFDM, no interference occurs between the signals even if their sidebands overlap. So, guard bands can be removed, thus saving bandwidth. The criteria that needs to be maintained is that the carrier spacing should be equal to the reciprocal of the symbol period.

In order that OFDM works, there should be very accurate synchronization between the communicating nodes. If frequency deviation occurs in the sub-streams, they will not be orthogonal any more, due to which interference between the signals will occur.

The following diagram plots FDM versus OFDM, to depict the saving in bandwidth obtained by OFDM − 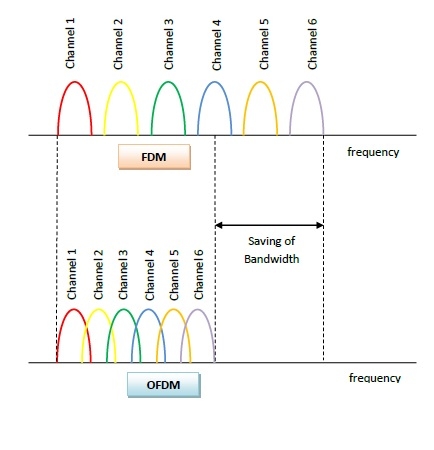 OFDM is used in the following area −