UML defines specific notations for each of the building blocks.

A class is represented by a rectangle having three sections −

An abstract class has the class name written in italics.

Example − Let us consider the Circle class introduced earlier. The attributes of Circle are x-coord, y-coord, and radius. The operations are findArea(), findCircumference(), and scale(). Let us assume that x-coord and y-coord are private data members, radius is a protected data member, and the member functions are public. The following figure gives the diagrammatic representation of the class. 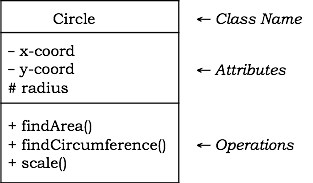 An object is represented as a rectangle with two sections −

Example − Let us consider an object of the class Circle named c1. We assume that the center of c1 is at (2, 3) and the radius of c1 is 5. The following figure depicts the object.

A component is a physical and replaceable part of the system that conforms to and provides the realization of a set of interfaces. It represents the physical packaging of elements like classes and interfaces.

Notation − In UML diagrams, a component is represented by a rectangle with tabs as shown in the figure below.

Notation − Generally, an interface is drawn as a circle together with its name. An interface is almost always attached to the class or component that realizes it. The following figure gives the notation of an interface.

A package is an organized group of elements. A package may contain structural things like classes, components, and other packages in it.

Notation − Graphically, a package is represented by a tabbed folder. A package is generally drawn with only its name. However it may have additional details about the contents of the package. See the following figures.

The notations for the different types of relationships are as follows − 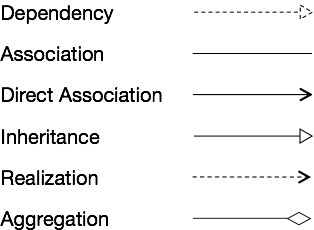 Usually, elements in a relationship play specific roles in the relationship. A role name signifies the behavior of an element participating in a certain context.

Example − The following figures show examples of different relationships between classes. The first figure shows an association between two classes, Department and Employee, wherein a department may have a number of employees working in it. Worker is the role name. The ‘1’ alongside Department and ‘*’ alongside Employee depict that the cardinality ratio is one–to–many. The second figure portrays the aggregation relationship, a University is the “whole–of” many Departments.