The network allocation vector (NAV) is a virtual carrier sensing mechanism that forms an important part of the carrier sense multiple access with collision avoidance (CSMA/CA). It is implemented in wireless network protocols, IEEE 802.11 and IEEE 802.16, which operates in the medium access control (MAC) layer.

The network allocation vector can be considered as a counter that counts down to zero. The maximum NAV duration is the transmission time required by frame, which is the the time for which the channel will be busy. At the start of transmission of a frame, the NAV value is set to its maximum. A non-zero value indicates that the channel is busy, and so no station contends for it. When the NAV value decrements to 0, it indicates that the channel is free and the other stations can contend for it. 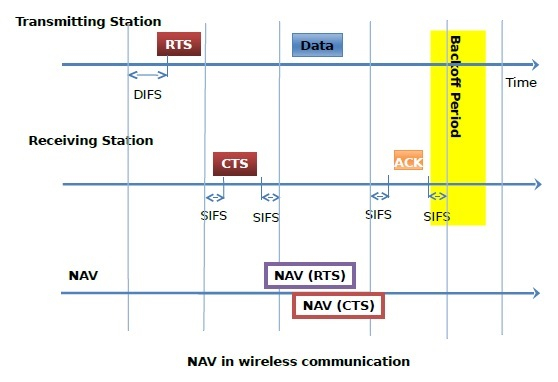 The steps in transmission as depicted in the above diagram are −

Stations in the wireless network are mostly powered by battery. So conserving power is a key issue. Without NAV, the mobile stations need to repeatedly check whether the channel is free, a task that consumes considerable power. However, when NAV is used, in the period with non-zero NAV value, no carrier sensing is done by any of the devices in the wireless network. Thus, energy conservation is achieved.