We understand unit testing is a method by which individual units of source code can be tested to determine whether they are fit for use or not. Java programmers can use Junit framework to write test cases. Similarly, MuleSoft is also having a framework called MUnit allowing us to write automated test cases for our APIs and integrations. It is a perfect fit for continuous integration/deployment environment. One of the biggest advantages of MUnit framework is that we can integrate it with Maven and Surefire.

As discussed, MUnit is fully integrated in Anypoint studio and we can design and test our Mule apps and APIs graphically or in XML within Anypoint studio. In other words, we can use graphical interface of Anypoint Studio to do the following −

So, let us start discussing each task one by one.

Once you start new project, it will automatically add a new folder namely src/test/munit to our project. For example, we started a new Mule project namely test_munit, you can see in the below image, it adds the above-mentioned folder under our project.

Now, once you started new project, there are two basic ways to create a new MUnit test in Anypoint Studio −

We are going to use ‘Right-click the flow’ way to create a test for specific flow.

First, we need to create a flow in the workspace as follows − 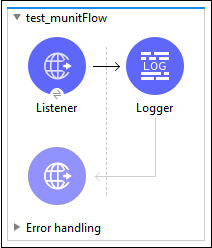 Now, right click on this flow and select MUnit to create a test for this flow, as shown below − 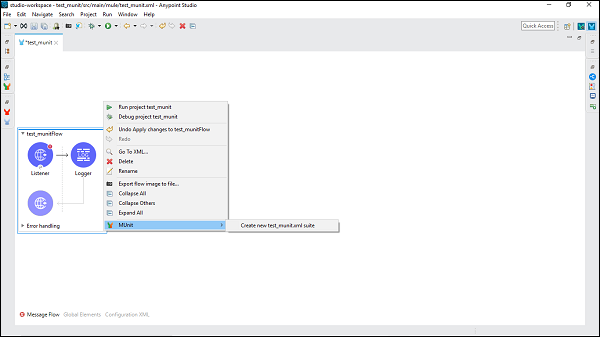 It will create a new test suite named after the XML file where the flow resides. In this case, test_munit-test-suite is the name of the new test suite as shown below − 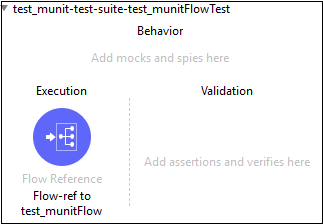 Following is the XML editor for the above message flow − 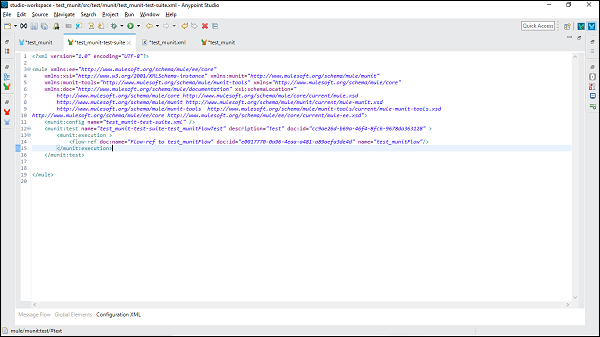 Now, we can add an MUnit message processor to the test suite by dragging it from Mule Palette. 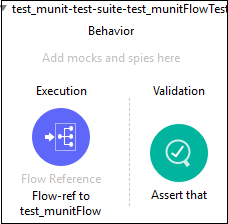 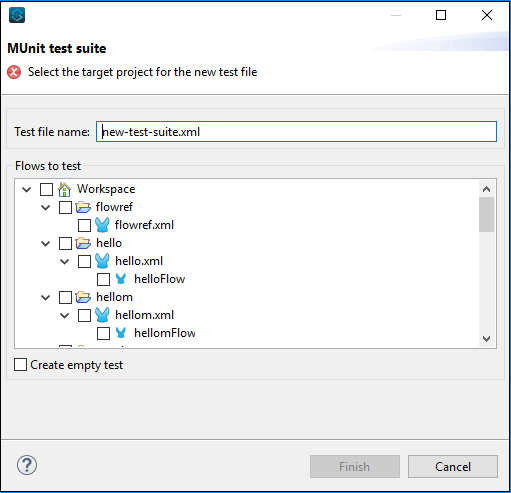 In Mule 4, we have two new sections namely MUnit and MUnit Tools, collectively having all MUnit message processor. You can drag any of the message processor in your MUnit test area. It is shown in the below screenshot − 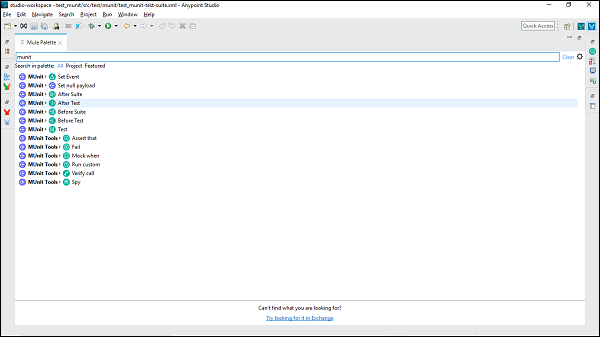 Now, if you want to edit the configuration for your suit or test in Anypoint Studio, then you need to follow the below steps −

Go to the Package Explorer and right click on the .xml file for your suite or test. Then, select the Properties. 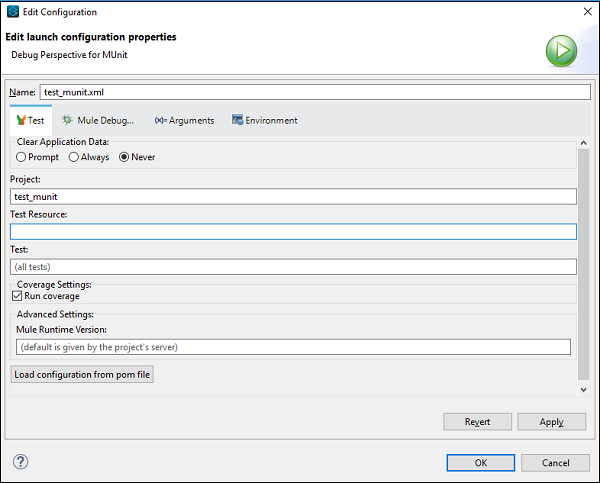 For running a test suite, right click on the empty part of the Mule Canvas where your test suite resides. It will open a drop-down menu. Now, click on the Run MUnit suite as shown below − 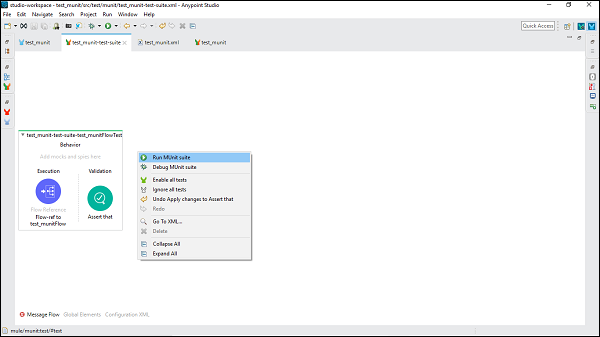 Later, we can see the output in the console.

To run a specific test, we need to select the specific test and right-click on that. We will get the same drop-down menu as we got while running test suite. Now, click on the Run MUnit Test option as shown below − 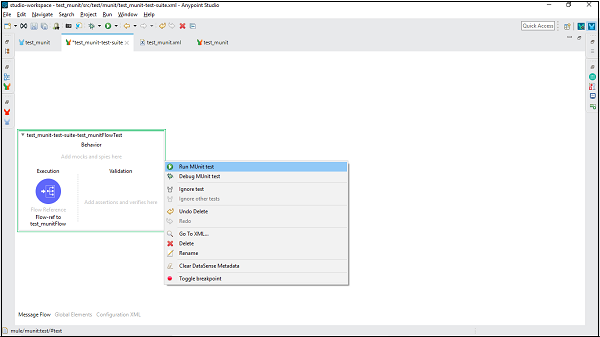 There after the output can be seen in the console.

Anypoint studio displays the MUnit test result in the MUnit tab of the left-hand explorer pane. You can find successful tests in green color and failed tests in red one as shown below − 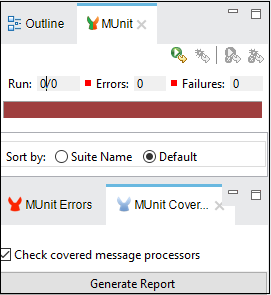 We can analyze our test result by viewing the coverage report. The main feature of Coverage Report is to provide a metric on how much of a Mule application has been successfully executed by a set of MUnit tests. MUnit coverage is basically based on the amount of MUnit message processors executed. MUnit coverage report provides metric for the following −

To get the coverage report, we need to click on ‘Generate Report’ under MUnit tab as shown below − 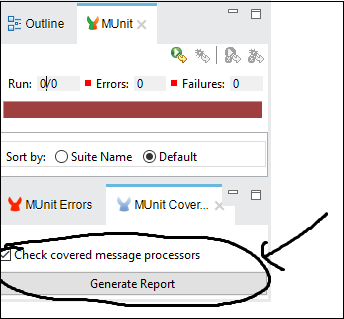 For debugging a test suite, right click on the empty part of the Mule Canvas where your test suite resides. It will open a drop-down menu. Now, click on the Debug MUnit Suite as shown in the below image − 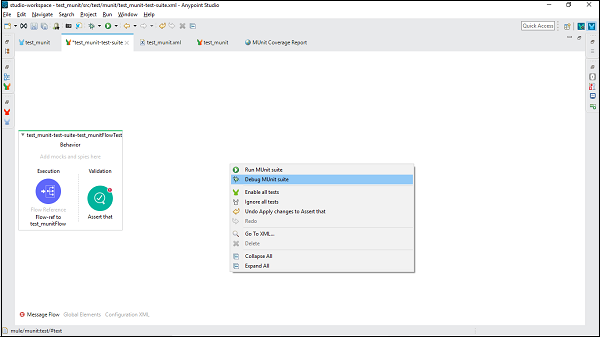 Then, we can see the output in the console.

To debug a specific test, we need to select the specific test and right-click on that. We will get the same drop-down menu as we got while debugging test suite. Now, click on the Debug MUnit Test option. It is shown in the below screen shot. 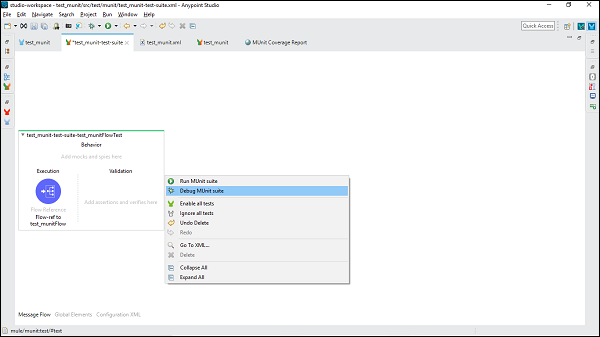