As the name suggests, this router applies DataWeave logic to choose one of two or more routes. As discussed earlier, each route is a separate sequence of Mule event processors. We can define choice routers as the router that dynamically routes message through a flow according to a set of DataWeave expressions used to evaluate message content.

The effect of using Choice router is just like adding conditional processing to a flow or an if/then/else code block in most of the programming languages. Following is the schematic diagram of a Choice Router, having three options. Among those, one is the default router. 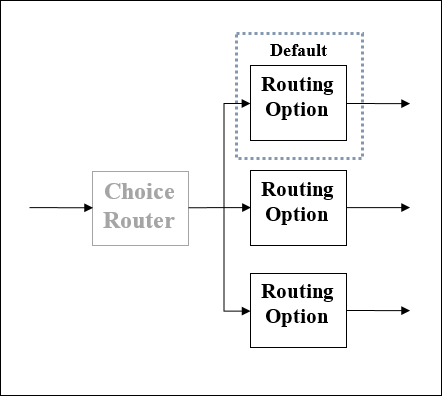 Another most used routing event processor is Scatter-Gather component. As its name implies, it works on the fundamentals of scatters (copy) and Gather (Consolidates). We can understand its working with the help of following two points −

Following is the schematic diagram of a Scatter-Gather Router having four event processors. It executes every route in parallel and not sequentially. 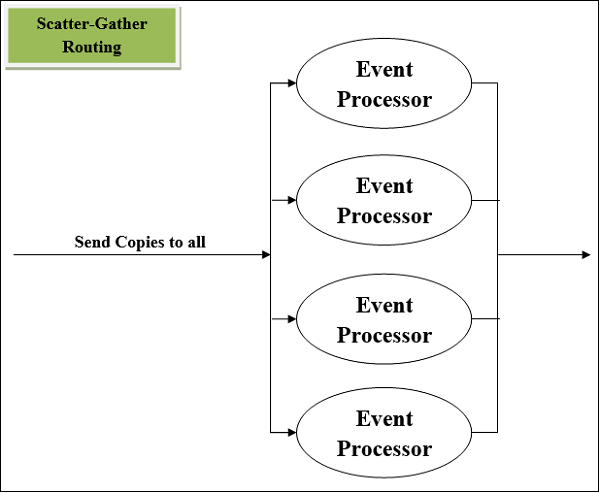 To handle this error type, a try scope can be used in each route of Scatter-Gather component. If the error is successfully handled by try scope, then the route will be able to generate a Mule event, for sure.

As the name implies, this component takes a variable name and removes that variable from the Mule event.

With the help of set-payload component, we can update the payload, which can be a literal string or DataWeave expression, of the message. It is not recommended to use this component for complex expressions or transformations. It can be used for simple ones like selections.

We can set a payload through XML configuration code −

The above example will append today’s date with the message payload “Hi”.

With the help of set variable component, we can create or update a variable to store values which can be simple literal values like strings, message payloads or attribute objects, for use within the flow of Mule application. It is not recommended to use this component for complex expressions or transformations. It can be used for simple ones like selections.

The example below will set the variable to the message payload −

Similarly, the example below will set the variable to the message payload −