So far, we have used MATLAB environment as a calculator. However, MATLAB is also a powerful programming language, as well as an interactive computational environment.

In previous chapters, you have learned how to enter commands from the MATLAB command prompt. MATLAB also allows you to write series of commands into a file and execute the file as complete unit, like writing a function and calling it.

You can use the MATLAB editor or any other text editor to create your .mfiles. In this section, we will discuss the script files. A script file contains multiple sequential lines of MATLAB commands and function calls. You can run a script by typing its name at the command line.

To create scripts files, you need to use a text editor. You can open the MATLAB editor in two ways −

The above command will create the file in default MATLAB directory. If you want to store all program files in a specific folder, then you will have to provide the entire path.

Let us create a folder named progs. Type the following commands at the command prompt (>>) −

If you are creating the file for first time, MATLAB prompts you to confirm it. Click Yes. 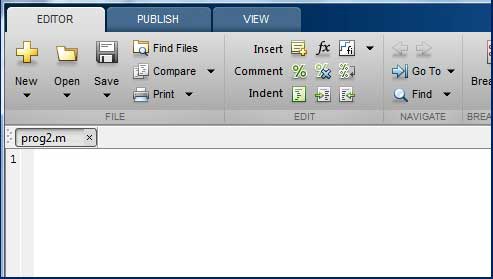 Alternatively, if you are using the IDE, choose NEW -> Script. This also opens the editor and creates a file named Untitled. You can name and save the file after typing the code.

Type the following code in the editor −

After creating and saving the file, you can run it in two ways −

Create a script file, and type the following code −