In this algorithm, the data points are assigned to a cluster in such a manner that the sum of the squared distance between the data points and centroid would be minimum. It is to be understood that less variation within the clusters will lead to more similar data points within same cluster.

Step 1 − First, we need to specify the number of clusters, K, need to be generated by this algorithm.

Step 2 − Next, randomly select K data points and assign each data point to a cluster. In simple words, classify the data based on the number of data points.

Step 3 − Now it will compute the cluster centroids.

Step 4 − Next, keep iterating the following until we find optimal centroid which is the assignment of data points to the clusters that are not changing any more

It is a simple example to understand how k-means works. In this example, we are going to first generate 2D dataset containing 4 different blobs and after that will apply k-means algorithm to see the result.

The following code will generate the 2D, containing four blobs − 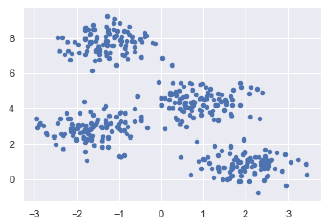 Next, make an object of KMeans along with providing number of clusters, train the model and do the prediction as follows −

Now, with the help of following code we can plot and visualize the cluster’s centers picked by k-means Python estimator − 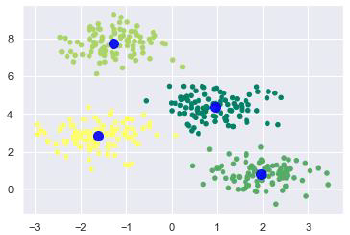 Let us move to another example in which we are going to apply K-means clustering on simple digits dataset. K-means will try to identify similar digits without using the original label information.

Next, load the digit dataset from sklearn and make an object of it. We can also find number of rows and columns in this dataset as follows −

The above output shows that this dataset is having 1797 samples with 64 features.

The above output shows that K-means created 10 clusters with 64 features.

As output, we will get following image showing clusters centers learned by k-means.

Next, we can check the accuracy as follows −

The above output shows that the accuracy is around 80%.

The following are some advantages of K-Means clustering algorithms −

The following are some disadvantages of K-Means clustering algorithms −

The main goals of cluster analysis are −

To fulfill the above-mentioned goals, K-means clustering is performing well enough. It can be used in following applications −