Support vector machines (SVMs) are powerful yet flexible supervised machine learning algorithms which are used both for classification and regression. But generally, they are used in classification problems. In 1960s, SVMs were first introduced but later they got refined in 1990. SVMs have their unique way of implementation as compared to other machine learning algorithms. Lately, they are extremely popular because of their ability to handle multiple continuous and categorical variables.

An SVM model is basically a representation of different classes in a hyperplane in multidimensional space. The hyperplane will be generated in an iterative manner by SVM so that the error can be minimized. The goal of SVM is to divide the datasets into classes to find a maximum marginal hyperplane (MMH). 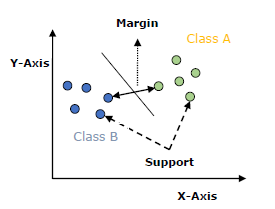 The followings are important concepts in SVM −

In practice, SVM algorithm is implemented with kernel that transforms an input data space into the required form. SVM uses a technique called the kernel trick in which kernel takes a low dimensional input space and transforms it into a higher dimensional space. In simple words, kernel converts non-separable problems into separable problems by adding more dimensions to it. It makes SVM more powerful, flexible and accurate. The following are some of the types of kernels used by SVM.

It can be used as a dot product between any two observations. The formula of linear kernel is as below −

From the above formula, we can see that the product between two vectors say 𝑥 & 𝑥𝑖 is the sum of the multiplication of each pair of input values.

It is more generalized form of linear kernel and distinguish curved or nonlinear input space. Following is the formula for polynomial kernel −

Here d is the degree of polynomial, which we need to specify manually in the learning algorithm.

Here, gamma ranges from 0 to 1. We need to manually specify it in the learning algorithm. A good default value of gamma is 0.1.

The following is an example for creating an SVM classifier by using kernels. We will be using iris dataset from scikit-learn −

We will start by importing following packages −

Now, we need to load the input data −

From this dataset, we are taking first two features as follows −

Next, we will plot the SVM boundaries with original data as follows −

Now, we need to provide the value of regularization parameter as follows −

Next, SVM classifier object can be created as follows − 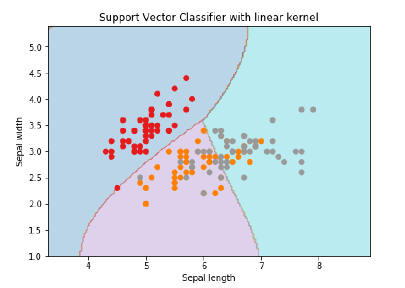 For creating SVM classifier with rbf kernel, we can change the kernel to rbf as follows − 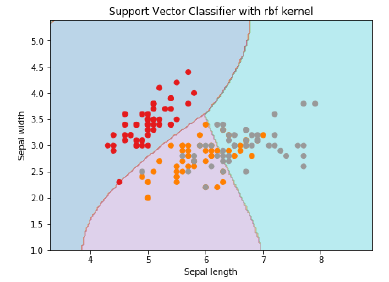 We put the value of gamma to ‘auto’ but you can provide its value between 0 to 1 also.

Pros and Cons of SVM Classifiers

They have high training time hence in practice not suitable for large datasets. Another disadvantage is that SVM classifiers do not work well with overlapping classes.