If you are still willing to set up your environment for Lisp programming language, you need the following two softwares available on your computer, (a) Text Editor and (b) The Lisp Executer.

This will be used to type your program. Examples of few editors include Windows Notepad, OS Edit command, Brief, Epsilon, EMACS, and vim or vi.

Name and version of text editor can vary on different operating systems. For example, Notepad will be used on Windows, and vim or vi can be used on windows as well as Linux or UNIX.

The files you create with your editor are called source files and contain program source code. The source files for Lisp programs are typically named with the extension ".lisp".

Before starting your programming, make sure you have one text editor in place and you have enough experience to write a computer program, save it in a file, finally execute it.

The source code written in source file is the human readable source for your program. It needs to be "executed", to turn into machine language so that your CPU can actually execute the program as per instructions given.

CLISP is the GNU Common LISP multi-architechtural compiler used for setting up LISP in Windows. The windows version emulates a unix environment using MingW under windows. The installer takes care of this and automatically adds clisp to the windows PATH variable.

You can get the latest CLISP for Windows from here - https://sourceforge.net/projects/clisp/files/latest/download 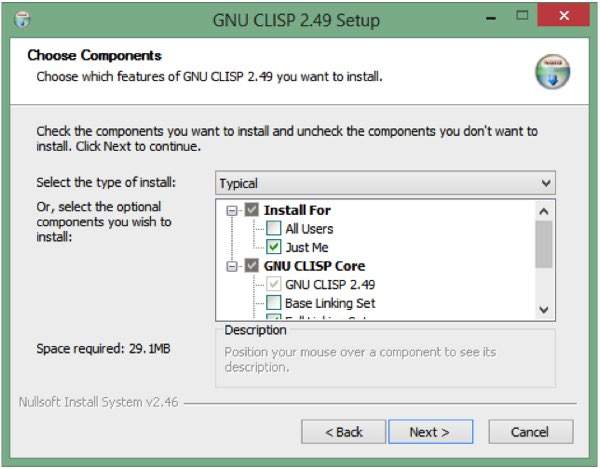 It creates a shortcut in the Start Menu by default, for the line-by-line interpreter.

How to use CLISP

During installation, clisp is automatically added to your PATH variable if you select the option (RECOMMENDED) This means that you can simply open a new Command Prompt window and type “clisp” to bring up the compiler.