Fully self-driving cars may soon be a reality with Tesla cars. But Tesla still has a long way to completely set its autopilot suite of self-governing technologies in place. Autonomous driving refers to driving cars without the need of any human involvement. As of now, Tesla cars are semi-autonomous i.e. features that assist drivers on highways.

The Tesla autopilot is a semi-autonomous system. It was rolled out in October 2014 in Tesla Model S cars. But it was only in 2015, that the Tesla Autopilot system (Tesla Version 7.0) rolled out. It allowed the car to adjust its speed as per others cars on the road, keep in its lane but change them independently as well. This system could scan spaces for parking while parking them (including in the perpendicular position) independently too.

Currently, Autopilot, under certain criteria, needs to be enabled before using it and is mostly to be used on highways. The Tesla autopilot makes use of radars, cameras, maps of surroundings, sensors around bumpers picking up objects around 16 feet away, high precision GPS etc. Model S and Model X comes with the new version 7.1. This version comes with a ‘Summon’ feature in which the cars owners can call their car from 40 feet away, the car will come out of the parking towards the owner (possible by a tap on the phone). The cars can locate curves, and adjust speeds. All software updates are managed wirelessly along with a live feedback system available. The new Tesla Model 3 comes with all the automatic features, at no added charges, barring a few features for which the owners need to pay a little extra. Since 2014, all the new Tesla vehicles are equipped with the hardware required for Autopilot (automatic brakes, switching of lanes and blind spot warnings). 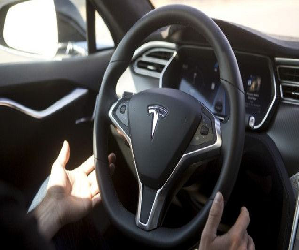 This new hardware was rolled out in October 2016, namely ‘Enhanced Autopilot.’ The new radar system is able to see through heavy fog, rain, dust etc.

Apart from the features mentioned above, the system has been introduced with Autosteer – the ability to steer the car at 45mph speed and below (this uses the cruise control system, sensors, and lane cameras). The TACC or the Traffic Aware Cruise Control speed limit is 85 mph. The software, when updated, comes with an Easter Egg which allows P100D to accelerate to about 60mph in a mere 2.4 seconds in Ludicrous mode. The new model can also move through various unnamed lanes in urban and rural streets, and manage along intersections with stop signs and traffic lights. Another feature of the car is its ability to take the owner to his/her home or to an assumed destination if the owner has not entered anything in the calendar. “All you will need to do is get in and tell your car where to go.” Elon Musk, CEO of Tesla Motors, says. Tesla also comes with an Automatic Emergency Steering which alerts the driver to take charge in case another vehicle comes too close and it swerves away.

With the new autopilot hardware suite, the Tesla Autopilot 2.0 comes with 12 ultrasonic sensors, eight 360 degrees camera – a forward camera with 250 meters range, 3 front facing, another with 150m range, wide forward camera with 60m range, rear facing camera, one on each side of the front fenders and B-pillars, and a 40 times powerful computer than the older one (Nvidia’s Titan GPU). These models are available on Tesla cars S, X, and 3. The Autopilot feature in all models also looks for spaces to move into for reaching faster to a proposed exit, especially in the case of slow traffic. This is possible on a freeway; and once done with swerving to another lane, the controls are given back to the driver. Automatic Emergency Braking, Side Collision Warning, Front Collision Warning and Auto High Beams (adjusting high/low beams) are just some of the other safety technologies that are being rolled out. 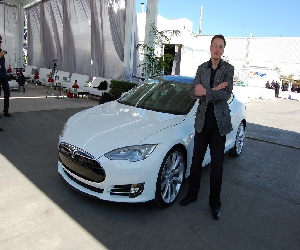 The Automatic Emergency Braking has been added in Autopilot 2.0 hardware, as a follow up to 8.1 software update. All of these features need to have a regulatory approval before one can start using a Tesla car. The radar technology has been created by Mobileye. Using complex algorithms and other features mentioned above, the black box of Mobileye recognizes the road ahead, chooses the best path while recognizing all other objects nearby. The radars in Autopilot 7.0 were built by Mobileye but the ones in Autopilot 8.0 have been built by Tesla. After October 2016, all models of Tesla will have the features of Autopilot.

After making the Tesla cars fully autonomous by the end of 2017, i.e. a driver less car, Elon Musk has promised a demonstration from coast to coast without any human interaction.