Protectionism is a policy of protecting the domestic businesses from foreign competition by applying tariffs, import quotas, or many types of other restrictions attached to the imports of foreign competitors’ goods and services.

There are many protectionist policies in place in many nations despite the fact that there is a popular consensus that the world economy, as a whole, benefits from free trade. 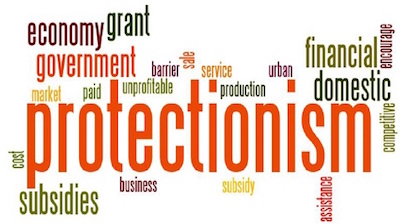 Currently, protectionism is in a unique form. Economists term the form as administered protection. Most rich nations have fair trade laws. The announced purpose of Free Trade Laws is twofold −

These mechanisms are meant to augment free trade.

End of Protectionism in History

Great Britain started to end the protective tariffs in the first half of the 19th century after achieving industrial leadership in Europe. Britain’s removal of protectionist measures and acceptance of free trade was symbolized by the repeal of the Corn Laws (1846) and various other duties on imported grains.

Europe’s protectionist policies became relatively mild in the latter half of the 19th century. However, France, Germany, and many other nations imposed customs duties to shelter the improving industrial belts from British competition. Customs duties fell sharply in Western world by 1913, and import quotas were almost never used.

The damage and displacement in World War I inspired an increasing raise of customs barriers in Europe in the 1920s. Great Depression of the 1930s resulted in record levels of unemployment which led to an epidemic of protectionism.

The United States was also a protectionist country, and the levied tariffs reached the top during 1820s and the Great Depression. The Smoot-Hawley Tariff Act (1930) raised the average tariff on imported goods by about 20 percent.

US protectionist policies started getting vanished by the middle of the 20th century. By 1947, the United States became one of the 23 nations to sign reciprocal trade agreements (the General Agreement on Tariffs and Trade - GATT). GATT, which was amended in 1994, was taken over by the World Trade Organization (WTO) in Geneva (1995). WTO negotiations have led to reduced customs tariffs by most of the major trading nations.