How Microsoft’s Surface Pro 4 and Windows 10 beat Apple and Google in productivity?

The digital world has always been action packed and aggressively competitive since its existence. With exponentially continuous breakthroughs in the world of science and technology, the tech giants like Microsoft, Google, and Apple have been within a perpetual war against each other and the war doesn’t seem to come to an end in the near future. 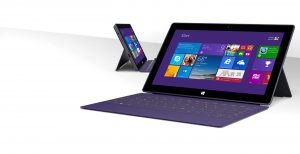 Unlike other kinds of war, whether real or virtual, instead of destructive consequences, this ‘tech-war’ only has constructive consequences bringing an immense amount of productivity for the end users like me and you. This competition in technology has shaped our present and will define our future.

A Word on Microsoft Windows

Microsoft windows is possibly the most popular operating system software across the globe. The power of this operating system lies in its versatility and compatibility with any computer in the world.Moreover, Windows is laced with regular updates and an interactive user interface.

This makes working on a computer using Windows easier than ever. You don’t need to be a programmer or a techie to use a Windows computer. With its latest iteration, Microsoft Window’s 10, various boundaries in the world of computing have been broken and the bars have been raised high.

What is the Microsoft Surface Pro?

Gone are the days when a computer used to be as humongous as a building and was limited to basic mathematical operations. In today’s world, a computer can be on your desk, inside your bag, or even inside your pocket. The Microsoft Surface Pro is a device that really induces the feeling that we live in the future.

A tablet, a laptop, a lap-tab, the Microsoft Surface Pro is all of it. To be more specific, the Surface Pro is basically a tablet that comes with fully functional PC version of the Windows 10 operating system. Just think how cool it is to bring the productivity of a PC on a tablet- you have the performance and the flexibility of space.

Time for an Upgrade

Finally, the time has come when you could actually replace your laptop with the Microsoft Surface Pro hybrid tablet. You can use the beautiful tablet along with its chiclet keyboard that comes with a spacious touchpad and doubles up as a screen cover when not in use. 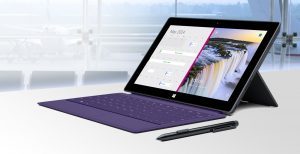 Not feeling like working? Do you want to turn work into play? Just detach the screen from the keyboard and go touchscreen mode. You can also cast some spells using the stylus pen as a wand that is provided along with the Surface Pro. Surface Pro also provides stunning visuals and great sound systems.

The base variant of the Microsoft Surface Pro comes with an Intel Core m3 processor along with 4 Gigabytes of RAM and 128 Gigabytes of internal storage space. Other configurations include:

The Surface Pro stands at around 8.45mm thick, 292.10mm tall, and 201.42mm wide while holding it in portrait mode. It weighs around 766 grammes for the core m3 variant and around 786 grams for both its Core i5 and Core i7 variants. Most of the real estate of the tablet is taken by the large and vibrant 12.3-inch display. 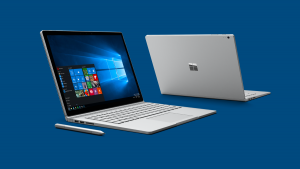 It has a rich resolution of 2736 x 1824 (pixel density of 267 Pixels per Inch). This highly responsive display also supports multitouch of up to 10 fingers. The Surface Pro comes with an exterior cover that has a silver color and a Magnesium casting. The volume rocker and the power button are the only two physical buttons that protrude along the edges of the Surface Pro (excluding the external keyboard.

This is where the Microsoft Surface Pro excels over laptops and desktops in productivity at par. The Surface Pro is laced with 5 megapixel and 8-megapixel front and back cameras that can record high definition videos up to the highest resolution of 1080p.

The Surface Pro has also got stereo microphones and stereo speakers supporting Dolby Audio Premium up its sleeve. The following sensors are also included in the arsenal of the Surface Pro:

This is an aspect where the Surface Pro beats every other tablet and any smartphone. The Microsoft Surface Pro comes laced with the Microsoft Window’s 10 Pro under the hood. A thirty-day trial version of Microsoft 360 is also included in the package. This version of windows is not like the mobile version that came with windows smartphones. Rather, it is the PC version along with all its features and productivity.

The Apple MacBook has earned itself a reputation of being one of the most premium devices available across the market. It is fast, simple, easy to use and is one of the most popular laptops of this era. From casual computing to high-end video editing, a MacBook does it all. 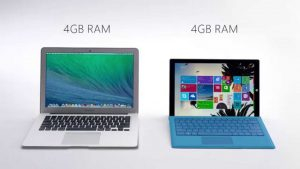 However, the area where the Microsoft Surface Pro with windows 10 beats the MacBook is the presence of the touch screen and the availability of s plethora of compatible software for windows.

You could literally be an artist and draw sketches over the Surface Pro’s touchscreen while enjoying the flexibility of a windows 10 device.

Yes, you can play some funky games, watch some videos play some music, or even get help with some day to day work with an Apple iPad. However, you cannot definitely write codes using programming languages as on the Surface Pro with an iPad. Moreover, no operating is even close to windows when it comes to handling and editing spreadsheets, presentations and documents. The Surface Pro is a definite yes for the workaholics.

The Google Chromebook is a cheaper alternative to the costly laptops that runs on Google’s Chrome OS. The chrome OS is strictly limited to the Chrome browser-based user interface. Very few applications for the chrome OS are available. On the other hand, the Surface Pro is at par with the Chromebook in terms of productivity and features. The sheer availability of compatible software and customization options is sufficient enough a reason to go with the Surface Pro.

An Android tablet can pull off almost all the tasks that an iPad can do, but, with lesser the security. Android tablets have been quite a phenomenon since their beginning. But, after all, Android tablets basically are just the same as Android smartphones with bigger displays and batteries. Windows, as an operating system, has been there for quite a while. Due to this fact, most of the programming languages, applications, utilities, peripherals, PC games, and etc. have been developed for Windows based devices. You will obviously get more software compatibility and more support along with higher productivity by going for a Windows based device.

The fact that you can have full windows features on a handheld device is exciting enough to stir your curious juice. Just imagine the numerous possibilities with the device. You can use the good old paint application to create an illustrious sketch. You can create your own website using instantly taken photographs with the Surface Pro.