After GPON development, FSAAN and ITU-T started working on NG-PON with the following features −

The main feature of NG-PON1 is to provide higher bandwidth than GPON as the same time. It should be backward compatible with the existing GPON network, which will reduce the operator’s cost. This NG-PON defined by the FSAN and ITU-T is known as XG-PON1.

By adding only 10G downstream card in the existing GPON OLT, the GPON enhanced to XG-PON1.

The following illustration shows the different GPON deployments, which can be further enhanced with XG-PON1 − 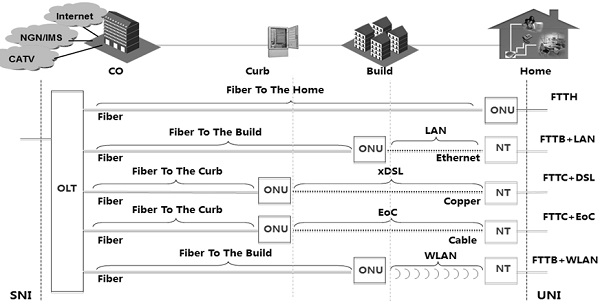 Generally, there are two types of deployments −

Green field is used where a complete new deployment is required, whereas in the Brownfield deployment, existing infrastructure will be used. So, for the Brown Field (only of GPON network) deployments, XG-PON1 can be used. In case, when copper network needs to be replaced with the fiber network, then it will be considered under the Green Field Network, as the existing network will be replaced with the new network completely.

Physical layer specifications for XG-PON1 were frizzed on Oct. 2009 and published on March 2010 by ITU-T. Downstream wavelength of 1575-1580 nm is selected by FSAN. C band. L band, and O band were compared in the selection of upstream wavelength, but C band was eliminated due to overlapping with RF video channels. Since, sufficient band guard was not available on L band and due to this, the same was also eliminated and all comparison with respect to pros and cons O- band was chosen because O+ has higher requirement on filters.

As per the above table, the downstream rate of XG-PON1 is 10 Gbps with the data rate of 9.5328 Gbps to keep the consistency with typical ITU-T rates, which is different from IEEE 10GE-PON, which is 10.3125 Gbps.

The enhancement in XG-PON1 framing structure is by aligning the frame and field design with word boundaries by matching the rate of XG-PON1. The DBA mechanism is more flexible with the upgradation, whereas the activation mechanism follows the same principle of GPON.

The two important features of XGTC layers are −

Data encryption was an optional feature in GPON, whereas in xG-PON1 there are three methods for authentication −

In both the cases (for GPON and XG-PON1) where lower layer technology is adopted is not a big concern as far as service is concerned. The important factor is to configure Layer 2 channel for proper forwarding of service data. All L2 configuration from the network side to user side is covered under OMCI L2 model.

The most impressive part of GPON and XG-PON1 is interoperability. XG-PON1 is backward compatible with GPON, in other words, an ONT/ONU connected with GPON OLT can work with XG-PON1 OLT as well. A group was established in 2008 by FSAN, which is known as OISG (OMSI Implementation Study Group).

This group was restricted to study the (G.984.4) recommendations for OMCI interoperability for ONT management and control channel (OMCC), QoS management, multicast configuration, S/W version updates, and L2 configuration. The official number of [G.984.4] is [ITU-T G.impl984.4] and is called as the OMCI implementation guide as well.

The following illustration is for WDM-PON, which also shows an array of wave-guide gratings (AWGs). These are used for the MUX and DEMUX wavelength.

In WDM-PON, different wavelength is required for different ONT. Each ONT gets an exclusive wavelength and enjoys the bandwidth resources of the wavelength. In other words, WDM-PON works on a logical Point-to-Multi Point (P2MP) topology.

In the WDM-PON, AWG is needed to be between OLT and ONT. Each port of the AWG is wavelength dependent and the optical transceiver on each ONT transmits optical signals in a specified wavelength determined by the port on the AWG.

In ODSM-PON, the network remains unchanged from CO to user premises except one change, which is active WDM splitter. A WDM splitter will be placed between OLT and ONT replacing passive splitter. In ODSM-PON, the downstream adopts WDM, means data towards ONT use different wavelength for different ONT and in upstream, ODSN-PON adopts dynamic TDMA + WDMA technologies.

GPON − ITU and FSAN standardized in 2005, compliance with the G.984 × series standards.

The following table describes the main features of XG-PON1.