GPON (Gigabit Passive Optical Networks) is an Optical System for the Access Networks, based on ITU-T specifications G.984 series. It can provide a 20 km reach with a 28dB optical budget (shown in the following illustration) by using class B+ optics with 1:32 split ratio. 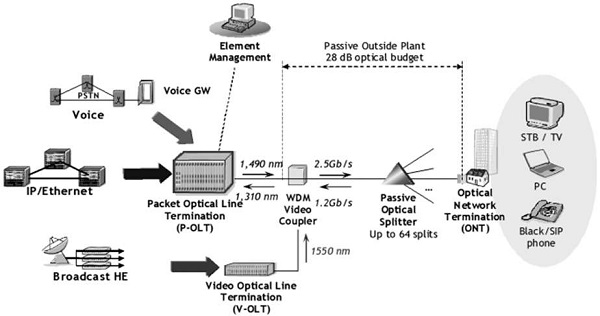 This evolutionary technology is based on BPON GEM. Following are its features − 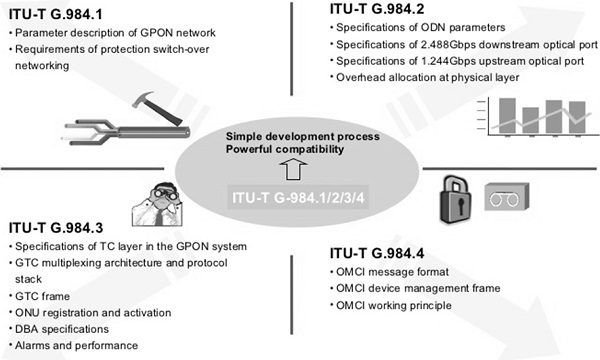 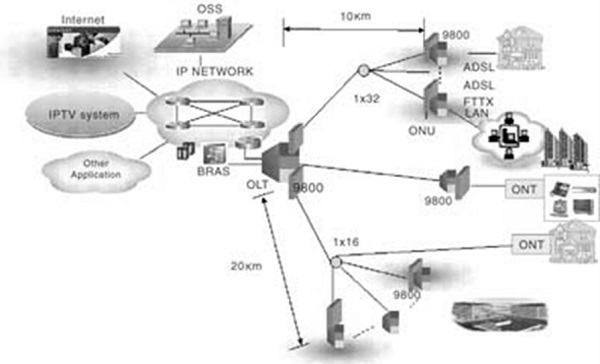 PON system may be symmetrical or asymmetrical. PON and fiber infrastructure can also be used for supporting any one-way distributive service. For example – Video at a different wavelength.

The OLT provides the service node interface (SNI) (typically 1 Gbps and/or 10 Gbps Ethernet LAN interfaces) towards the core network, and controls the GPON. The OLT consists of three major parts − 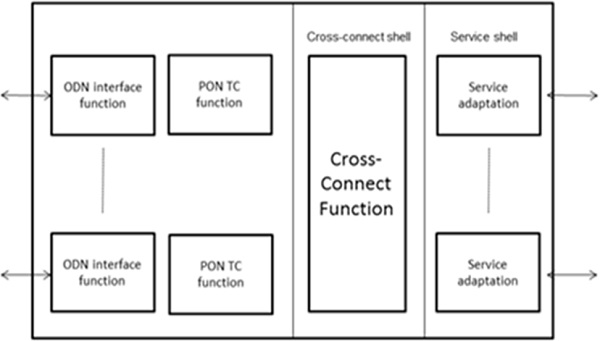 The Optical Network Unit (ONU) operates with a single PON interface or maximum two interfaces for link protection purposes. In case, any one fiber out of these two fibers is cut the ONU can be accessed through other fiber. This is called PON protection or Link Protection. Link protection is also known as link aggregation, which can protect the link and the same time, it can aggregate the traffic as well. 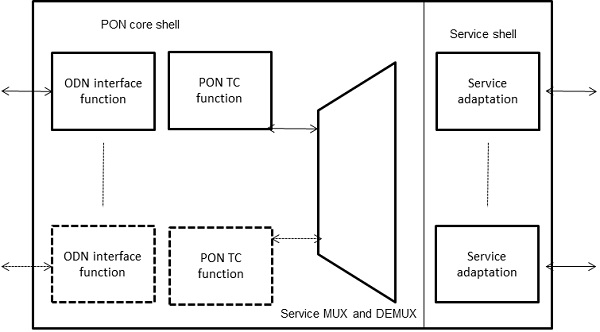 The optical network terminal (ONT), which is connected to the OLT at uplink side for service network interface, has many user-network interface ports. Typically, there will be four FE/GE ports towards UNI.

The optical network unit (ONU) terminates the GPON fiber and has much more user network interface (UNI) to multiple subscribers. UNI interface can be ADSL2+, VDSL2, Power Line, MoCA or HPNA, and the distance to the subscriber (10/100 Base-T is limited to 100m, which is 330 ft.).

Essentially, an ONT combines the function of an ONU and an NT in a single device. This combination of the two; together makes the ONT the most cost effective solution to provide GPON services to local and single-family, small, and medium enterprises. However, if a client on campus as students, hostels, schools, colleges, hospitals, or corporate offices, where there is already CAT-5 copper cable is laid, ONU can serve as a more appropriate solution. 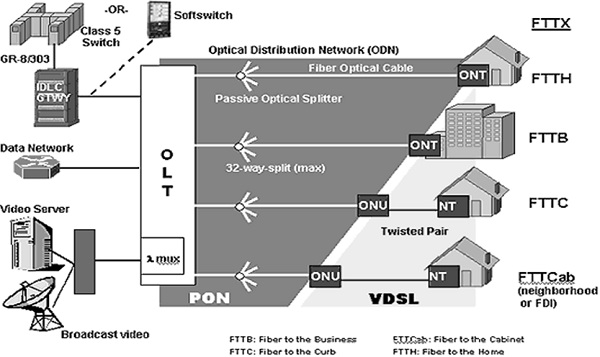 The ODN optical splitters divide the single fiber into multiple fibers going to different buildings and individual homes. The splitters can be placed in any location in the ODN, from the Central Office (CO)/ Local Exchange (LE) to the customer premises and may be of any size. The splitters are designated as [n:m], where ‘n’ is the number of input (towards OLT) = 1 or 2, and ‘m’ is the number of outputs (towards ONT) = 2,4,8,16,32,64.

The GPON multiplexing or framing is explained with the following factors.

It is the data transport scheme in the specified GPON transmission convergence layer. GEM provides a connection-oriented, variable-length framing mechanism for transport of data services over the passive optical network (PON). GEM is designed to be independent of the type of the service node interface at the OLT as well as the types of UNI interfaces at the ONUs. 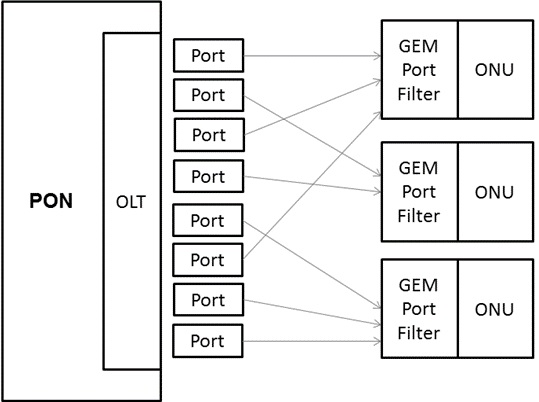 A Transmission container (T-CONT) is an ONU object representing a group of logical connections. It appears as a single entity for the purpose of upstream bandwidth assignment on the PON. Based on the mapping scheme, service traffic is carried to different GEM ports and then to different T-CONTs.

A protocol layer of the G-PON protocol suite that is positioned between the physical media dependent (PMD) layer and the G-PON clients. The GTC layer is composed of GTC framing sub-layer and GTC adaptation sub-layer.

In the downstream direction, the GEM frames are carried in the GTC payload, which arrive at all the ONUs. The ONU framing sub-layer extracts the frames, and the GEM TC adapter filters the frames based on their 12-bit Port-ID. Only frames with the appropriate Port-IDs are allowed through to the GEM client function.

In the upstream direction, the GEM traffic is carried over one or more T-CONTs. The OLT receives the transmission associated with the T-CONT and the frames are forwarded to the GEM TC adapter and then the GEM client.

The downstream frame has a duration of 125 microseconds and is 38880 bytes long, which corresponds to the downstream data rate of 2.48832 Gbit/s. The downstream GTC frame consists of the physical control block downstream (PCBd) and the GTC payload section.

Payload may have ATM and GEM partitions (either one or both)

Each upstream transmission burst contains an upstream physical layer overhead (PLOu) section and one or more bandwidth allocation intervals associated with the individual Alloc-IDs. The downstream GTC frame provides the common time reference for the PON and the common control signaling for the upstream.

The ATM partition has the following characteristics.

The GEM partition has the following characteristics.

A common complaint against BPON was inefficiency due to the ATM cell tax. GEM is similar to ATM. It has constant-size HEC-protected header. However, it avoids large overhead by allowing variable length frames. GEM is generic – any packet type (and even TDM) supported. GEM supports fragmentation and reassembly.

GEM is based on GFP, and the header contains the following fields −

The GEM header is XOR'ed with B6AB31E055 before transmission.

When transporting Ethernet traffic over GEM

When transporting TDM traffic over GEM −

GEM can fragment its payload. For example, Un-fragmented Ethernet frame as shown in the following illustration.

GEM fragments payloads for either of the following two reasons −

Reason 2 − GEM frame may be pre-empted for delay-sensitive data.

OLT encrypts using AES-128 in the counter mode. Only payload is encrypted (not ATM or GEM headers). Encryption blocks are aligned to the GTC frame. Counter is shared by OLT and all ONUs as follows −

OLT and each ONU must agree on a unique symmetric key. OLT asks ONU for a password (in PLOAMd). ONU sends password US in the clear (in PLOAMu) −

In the next chapter, we will understand what Ethernet Passive Optical Network is.