The Ethernet Passive Optical Network (EPON) is a PON encapsulate data with Ethernet and can offer 1 Gbps to 10 Gbps capacity. EPON follows the original architecture of a PON. Here, the DTE connected to the trunk of the tree and called as Optical Line Terminal (OLT) as shown in the following illustration. 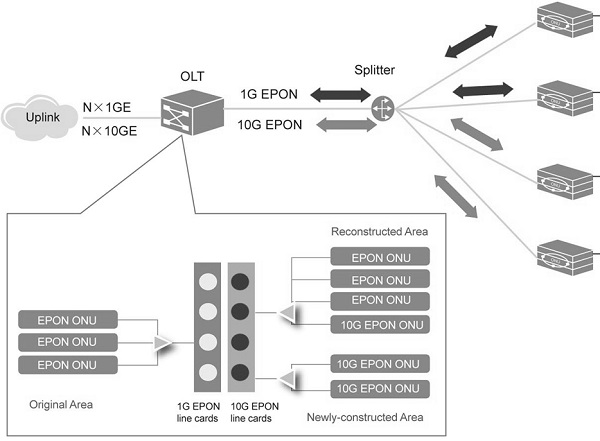 It is usually located at the service provider, and the connected the DTE branches of the tree are called Optical Network Unit (ONU), located in the premises of the subscriber. The signals from the OLT pass through a passive splitter to achieve the ONU and vice versa.

Ethernet in the First Mile

The standardization process began when a new study group called Ethernet in the First Mile (EFM) was established in November 2000, having as main objectives the study of Ethernet point-to-multipoint (P2MP) fiber with Ethernet copper. Ethernet over point-to-point (P2P) fiber and over a network operating mechanism, Administration and Maintenance (OAM) to facilitate network operation and troubleshooting. The EFM working group ends the process of normalization with the ratification of the IEEE Std 802.3ah in June 2004.

A product by EFM (Ethernet in the first mile). A PON technology based on Ethernet. It is based on a Major standard – IEEE 802.3ah. Based upon Multi-Point Control Protocol (MPCP), defined as a function within the MAC control sub-layer, to control access to a P2MP topology.

The basis of EPON/MPCP protocol lies in the point-to-point (P2P) emulation sub–layer. Its Transmission rate is → symmetric 1.25G; distance：10KM/20KM; splitter ratio： > 1:32. The EFM points out many advantages of EPON based on Ethernet as core technology, including protocols maturity, technology simple, extension flexibility, and users’ oriented.

EPON system does not choose expensive ATM hardware and SONET equipments, making it compatible to the existing Ethernet network. It simplifies system structure, decreases cost, and makes itself flexible to upgrade. Equipment venders focus on optimizing the function and practicability.

BPON ATM based systems have proven to be very inefficient, as a vast majority of traffic across the access network consists of large IP Frames and variable sizes. It has created the opportunity for the development of pure Ethernet based EPON, GigE password enjoying QoS, and cost-effective integration with other emerging Ethernet equipment. Ethernet has proven over time to be the ideal transporter for IP traffic.

Accordingly, the IEEE 802.3ah standard 802.3 instructed the "Ethernet in the First Mile" working group with the development of standards for point-to-point and point-to-multipoint access networks, the latter indicating Ethernet PON. EPON is currently a part of the Ethernet standard.

Development of Passive Optical Network (GPON) i.e. Gigabit-equipped standard (G.984 series) has really began after the proposals of the FSAN members (Quantum Bridge, Al) for an ATM/Ethernet PON solution. Gbps, which is independent of the protocol, was not very popular within the IEEE 802.3ah working group. FSAN has decided to pursue this as a different competing standard to the ITU.

EPON and GPON draw heavily from G.983, the standard of BPON, when it comes to general concepts that work well (operating PON Optical Distribution Network (ODN), wavelength plan and application). They both offer their own version of enhancements to accommodate better size IP/Ethernet frames at variable rates Gbps.

IEEE 802.3ah Ethernet standard specified access network and it also known as Ethernet in the First Mile as well. Section five of IEEE802.3ah makes up the IEEE Std 802.3 that corresponds to the definition of services and protocol elements. It allows the exchange of IEEE 802.3 format frames between stations in a subscriber access network.

EFM has introduced the concept of EPON in which a point-to-multipoint (P2MP) network topology is implemented with passive optical splitters. However, the Ethernet point-to-point fiber offers the highest bandwidth at a reasonable cost. Ethernet Point-to-multipoint fiber provides relatively high bandwidth at a lower cost. The purpose of the IEEE Std 802.3ah was to extend the application of Ethernet to include access subscriber networks to provide a significant increase in performance while minimizing equipment costs of operation and maintenance.

The conclusion of the IEEE 802.3ah EFM standard significantly expands the range and reach of Ethernet transport for the use in access and metro networks. This standard allows service providers a variety of flexible and cost effective solutions for the provision of broadband Ethernet services in the access and the metro networks.

EFM covers a family of technologies that differ in the type of media and signaling speed - it is designed to be deployed in the networks of a type or multiple (s) FSM media as well as interact with mixed 10/100/1000/10000 Mb/s Ethernet networks. Any network topology defined in IEEE 802.3 can be used on the premises of the subscriber and then connected to an Ethernet subscriber access network. EFM technology allows different types of topologies to achieve maximum flexibility.

IEEE Std 802.3ah includes specifications for Ethernet access networks of the subscriber and IEEE Std 802.3ah EPON supports a nominal rate of some 1 Gb/s (expandable to 10 Gb/s) for each channel. These are defined by two wavelengths: a downstream wavelength and one for the shared upstream direction between the user devices.

EPON implements a P2MP network topology with appropriate extensions to the undercoat and reconciliation sublayer MAC control, and optical fiber under layers physical medium dependent (PMD) to support this topology.

For P2MP topologies, EFM introduced a family of signaling systems for the physical layer that are derived from 1000BASE-X. However, it includes extensions of the RS, PCS, and PMA, with an optional forward error correction (FEC) capacity. 1000BASE-X PCS and PMA sublayers map the characteristics of the interface. The PMD sublayer (including MDI) the services expected by the undercoat reconciliation. 1000BASE-X can be extended to support other full duplex media - requires only that the environment is consistent with the level of PMD.

PMD is responsible for the interface to the transmission medium. PMD generates electrical or optical signals depending on the nature of the physical medium connected. 1000BASE-X connections over PON to at least 10 kilometers and 20 kilometers (undercoats 1000BASE-PX10 and 1000BASE-PX20 PMD) provide P2MP.

In a PON Ethernet, D and U suffixes indicate PMD at each end of the link, which transmits in these directions and receives in the opposite direction, i.e., a single downstream PMD is identified as 1000BASE-PX10-D and upstream 1000BASE-PX10 U PMD. The same fibers are used simultaneously in both the directions.

A 1000BASE-PX-U PMD or 1000BASE-PX-D PMD is connected to the appropriate PMA 1000BASE-X and to support via the MDI. PMD is optionally combined with management features that can be accessed via the management interface. To allow the upgrade possibilities in the case of 10 km or 20 km Pons, both 1000BASE-PX20-D 1000BASE-PX10 PMD and PMDU are inter-operable with each other.

PMA includes the transmission, receipt, clock recovery, and align functions. The PMA provides an independent middle way for PCS to support the use of a range of bit-oriented physical media series. The sublayer of physical coding (PCS) comprises codifications bit functions. The PCS interface is Gigabit media independent interface (GMII), which provides a uniform interface to the Reconciliation sublayer for all implementations of 1000 Mb/s PHY.

The interface GMII refers to the interface between the Gigabit MAC layer and the physical layer. It allows multiple DTE mixed with a variety of implementations from the speed gigabit physical layer. The PCS Service Interface allows 1000BASE-X PCS to transfer information to and from a PCS customer. PCS customers include MAC (via the undercoat of reconciliation) and repeater. The PCS interface is defined precisely as the Gigabit Media Independent Interface (GMII).

The Reconciliation sublayer (RS) ensures the matching of GMII signals defining the serviceaccess control medium. GMII and RS are used to provide independent media so that an access controller identical media can be used with any type of copper and optical PHY.

MAC control protocol was specified to support and new functions to be implemented and added to the standard at the same time. It is the case of multi-point control protocol (MPCP). The management protocol to P2MP is one of the functions defined by the Multi-Point Control Protocol.

The multipoint MAC control functionality is implemented to access devices of the subscriber containing physical layer devices point to multipoint. Commonly, MAC emulation jurisdictions provide a point-to-point service between OLT and the ONU, but an additional instance is now included with a communication goal for all ONUs at a time.

The MPCP indicates system between an OLT and ONUs associated with a Point-to-Multi-Point (P2MP) PON portion to permit productive transmission of information in the UPSTREAM heading. 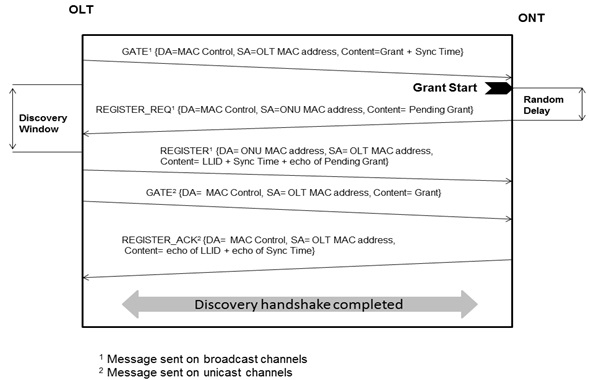 In EPON, the communication between OLT and ONY is regarded as downstream, OLT broadcast downstream data towards ONT using the entire bandwidth and on other end ONT receives the fames using information available on Ethernet Frames. The upstream from ONT to OLT is using single channel communication, means one channel will be used by multiple ONTs, which means data collision.

To avoid this problem, effective bandwidth allocation scheme is required, which can assign resources equally to ONTs as the same time ensuring the QoS, this scheme is known as Dynamic Bandwidth Allocation (DBA) algorithm. The DBA uses report and gate messages to build transmission schedule to be conveyed to the ONTs.

An important feature of EPON is to provide different services with optimum QoS and effective allocation of bandwidth using different DBA allocation to meet the demand of current and future applications.

Presently, following are the two different types of DBA algorithms available for the EPON −

The other characteristics are to avoid Frame Collisions, Managements of Real Time Traffic through QoS and Management of Bandwidth for each Subscriber along with Decrease Delay on Low Priority Traffic.

EPON operation is based on the Ethernet MAC and EPON frames are based on GbE frames, but extensions are needed −

Standard Ethernet starts with an essentially content-free 8B preamble −

In order to hide the new PON header, EPON overwrites some of the preamble bytes.

Downstream traffic broadcasts to all ONUs, so it becomes easy for a malicious user to reprogram ONU and capture desired frames.

Upstream traffic has not been exposed to other ONUs, so encryption is not needed. Do not consider fiber-tappers because EPON does not provide any standard encryption method, but −

BPON used a mechanism called churning — Churning was a low cost hardware solution (24b key) with several security flaws, such as −

In addition to these, there is a crucial difference between LLID and Port-ID −

The following table illustrates the comparative features of EPON and GPON −

The following image shows the different structures of EPON and GPON − 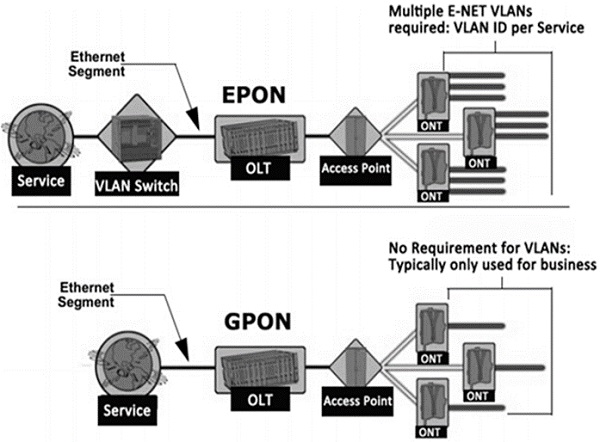