NFA stands for non-deterministic finite automata. It is easy to construct an NFA when compared to DFA for a given regular language.

The finite automata are called NFA when there exist many paths for specific input from the current state to the next state.

Each NFA can be translated into DFA but every NFA is Non DFA.

NFA is defined in the same way as DFA but with the following two exceptions, which are as follows − 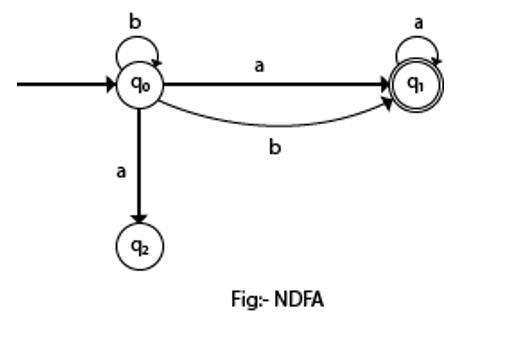 In the above NFA, it is clear that there exist many paths for specific input from the current state to the next state. (state q0 on input ‘b’ it goes to q0 itself and q1).

Non-deterministic finite automata also have five states which are same as DFA, but with different transition function, as shown follows −

Non-deterministic finite automata is defined as a 5 tuple,

Graphical Representation of an NFA

An NFA can be represented by digraphs called state diagrams.

The following factors are considered while graphically representing NFA −