In DFA, there is only one path input from the current state to the next state. It does not accept the null move, i.e. it cannot change state without any input. It can contain multiple final states. It is used in Lexical Analysis in compilers.

A DFA can be represented by digraphs called state diagrams.

The following factors are considered in DFA −

If a transition goes to a state from which it can never escape. Such a state is called a trap state. It is called the dead state. 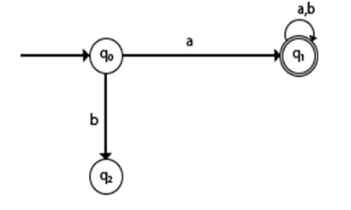 In the above example, q2 is a trap or dead state because it can’t reach the final state.

The different applications of deterministic finite automata are as follows −

Construct transition table of DFA for a given diagram.