Media Access Control (MAC) address is a physical address that works at the data link layer of the OSI model.

There are three types of MAC addresses −

A 48-bit MAC address is represented as a string of six octets, "MM:MM:MM:SS:SS:SS". 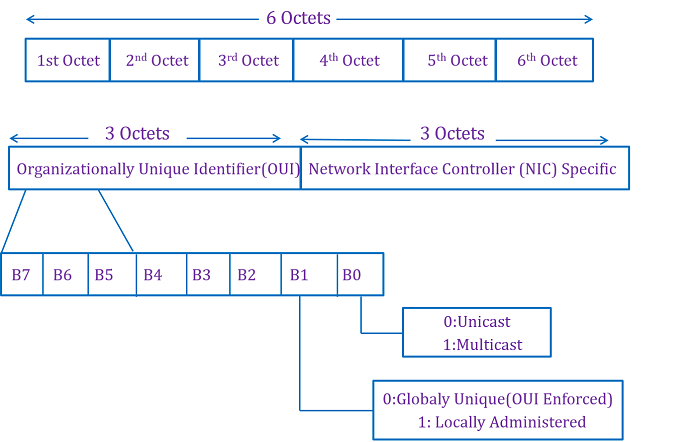 As shown in the above diagram, MAC addresses are 12-digit hexadecimal numbers (48 bits in length or 6-byte binary number). For example, let's take a network adapter with the MAC address "00-A0-C9-14-C8-29." The OUI (Organizational Unique Identifier) for the manufacture of this router is the first three octets ("00-A0-C9") is Intel corporation and the rightmost six digits represent the Network Interface Controller.

OUIs of some well-known manufacturers −

A network address always points to host / node / server or it can represent a whole network. Network address is always configured on network interface card and is generally mapped by system with the MAC address (hardware address or layer-2 address) of the machine for Layer-2 communication.

There are different kinds of network addresses in existence: 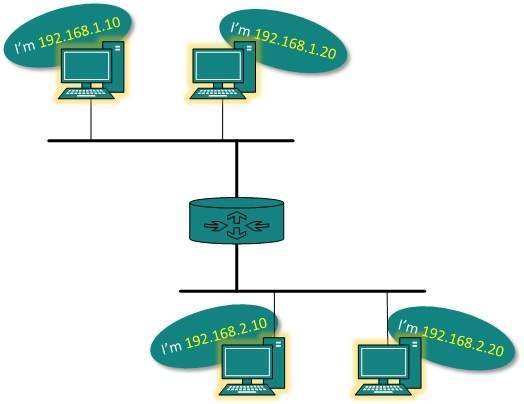 IP addressing provides mechanism to differentiate between hosts and network. Because IP addresses are assigned in hierarchical manner, a host always resides under a specific network.The host which needs to communicate outside its subnet, needs to know destination network address, where the packet/data is to be sent.

Hosts in different subnet need a mechanism to locate each other. This task can be done by DNS. DNS is a server which provides Layer-3 address of remote host mapped with its domain name or FQDN. When a host acquires the Layer-3 Address (IP Address) of the remote host, it forwards all its packet to its gateway. A gateway is a router equipped with all the information which leads to route packets to the destination host.

Routers take help of routing tables, which has the following information:

Routers upon receiving a forwarding request, forwards packet to its next hop (adjacent router) towards the destination.

The next router on the path follows the same thing and eventually the data packet reaches its destination.

Network address can be of one of the following:

A router never forwards broadcast traffic by default. Multicast traffic uses special treatment as it is most a video stream or audio with highest priority. Anycast is just similar to unicast, except that the packets are delivered to the nearest destination when multiple destinations are available.

Following are the important differences between MAC Address and IP Address.