DBMS is a highly complex system with hundreds of transactions being executed every second. The durability and robustness of a DBMS depends on its complex architecture and its underlying hardware and system software. If it fails or crashes amid transactions, it is expected that the system would follow some sort of algorithm or techniques to recover lost data.

To see where the problem has occurred, we generalize a failure into various categories, as follows −

A transaction has to abort when it fails to execute or when it reaches a point from where it can’t go any further. This is called transaction failure where only a few transactions or processes are hurt.

Reasons for a transaction failure could be −

Examples may include operating system errors.

In early days of technology evolution, it was a common problem where hard-disk drives or storage drives used to fail frequently.

Disk failures include formation of bad sectors, unreachability to the disk, disk head crash or any other failure, which destroys all or a part of disk storage.

We have already described the storage system. In brief, the storage structure can be divided into two categories −

When a system crashes, it may have several transactions being executed and various files opened for them to modify the data items. Transactions are made of various operations, which are atomic in nature. But according to ACID properties of DBMS, atomicity of transactions as a whole must be maintained, that is, either all the operations are executed or none.

When a DBMS recovers from a crash, it should maintain the following −

There are two types of techniques, which can help a DBMS in recovering as well as maintaining the atomicity of a transaction −

Log is a sequence of records, which maintains the records of actions performed by a transaction. It is important that the logs are written prior to the actual modification and stored on a stable storage media, which is failsafe.

It reads Tn has changed the value of X, from V1 to V2.

The database can be modified using two approaches −

When more than one transaction are being executed in parallel, the logs are interleaved. At the time of recovery, it would become hard for the recovery system to backtrack all logs, and then start recovering. To ease this situation, most modern DBMS use the concept of 'checkpoints'.

Keeping and maintaining logs in real time and in real environment may fill out all the memory space available in the system. As time passes, the log file may grow too big to be handled at all. Checkpoint is a mechanism where all the previous logs are removed from the system and stored permanently in a storage disk. Checkpoint declares a point before which the DBMS was in consistent state, and all the transactions were committed.

When a system with concurrent transactions crashes and recovers, it behaves in the following manner − 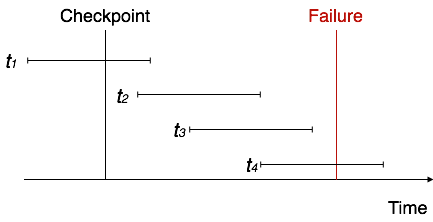