A volatile storage like RAM stores all the active logs, disk buffers, and related data. In addition, it stores all the transactions that are being currently executed. What happens if such a volatile storage crashes abruptly? It would obviously take away all the logs and active copies of the database. It makes recovery almost impossible, as everything that is required to recover the data is lost.

Grown-up databases are too bulky to be frequently backed up. In such cases, we have techniques where we can restore a database just by looking at its logs. So, all that we need to do here is to take a backup of all the logs at frequent intervals of time. The database can be backed up once a week, and the logs being very small can be backed up every day or as frequently as possible.

Remote backup provides a sense of security in case the primary location where the database is located gets destroyed. Remote backup can be offline or real-time or online. In case it is offline, it is maintained manually. 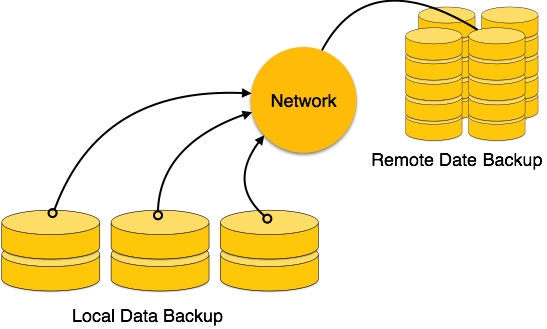 Online backup systems are more real-time and lifesavers for database administrators and investors. An online backup system is a mechanism where every bit of the real-time data is backed up simultaneously at two distant places. One of them is directly connected to the system and the other one is kept at a remote place as backup.

As soon as the primary database storage fails, the backup system senses the failure and switches the user system to the remote storage. Sometimes this is so instant that the users can’t even realize a failure.