Conversion of Gray Code to Binary

Conversion of Gray to Binary Code

You can construct Gray codes using other methods but they may not be performed in parallel like given above method. For example, 3 bit Gray codes can be contracted using K-map which is given as following below:

This is very simple method to get Binary number from Gray code. These are following steps for n-bit binary numbers − 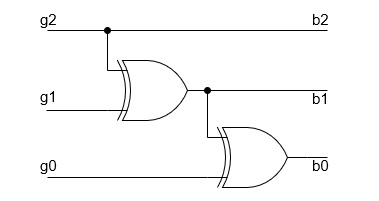 So, according above algorithm,