Also known for performing a cartwheel that ends in a split at the end of her fashion shows, Betsey Johnson has more than 60 stores worldwide. Some of the stores are located in top cities of the world, such as London, Tokyo, and Toronto. 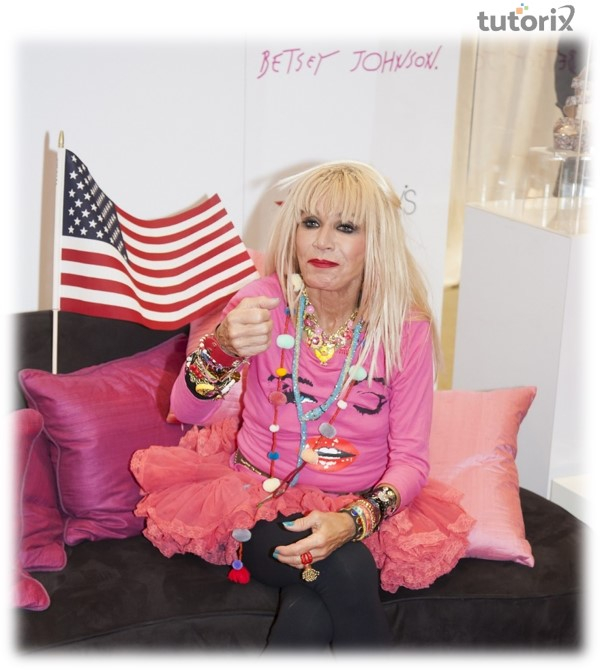 Betsey Johnson was born on August 10, 1942, in Wethersfield, Connecticut. She was the second of three children born to Lena and John Johnson. She grew up in Terryville, Connecticut, where she took many dance classes, which sparked her interest in costumes. She had a natural talent for art and trained in various styles of dance throughout her childhood. Interestingly, she attributes much of her early interest in fashion to a mix of the two. Betsey Johnson was a cheerleader in high school, and after graduating in 1960, she went on to study art and design at the Pratt Institute in Brooklyn. Later she migrated to Syracuse University after one year at Pratt and graduated with magna cum laude as a member of the Phi Beta Kappa society in 1964. During her college days, Johnson was a member of the Alpha Xi Delta women’s sorority. After her graduation, she also interned at Mademoiselle magazine.

The Career of Betsey Johnson

After graduating from college, Johnson made her debut in the New York fashion industry by winning Mademoiselle Magazine’s Guest Editor Contest. Because of her achievements and natural talent, she was offered a job in the art department of the same magazine.

The following year, in 1965, Johnson got another opportunity as a designer at Paraphernalia, an eccentric New York clothing boutique.

Johnson developed her own fanciful, hippie-inspired style at Paraphernalia, which was distinguished by the use of unusual fabrics such as shower curtains, automobile interior linings, and the pinstriped wool of old New York Yankees uniforms. Some other reasons of becoming popular were, her designs were known for the use of bright, neon dyes, puffed sleeves, deep necklines, and low waists, which were pretty creative and unique at that time.

Johnson, along with designer Mary Quant and artist Andy Warhol, helped to pioneer the “Youthquake” fashion, art, and culture movement. Johnson left Paraphernalia in 1970, as she got better opportunity to become creative director of Alley Cat, a young sportswear label. Here, she continued to design clothes with bright colors, bizarre patterns, and sexy fits.

In 1971, Johnson received the prestigious Coty Fashion Critics Award for her work at Alley Cat. Likewise, she became the youngest designer ever to receive the award at the age of 29.

Johnson’s career stalled after his meteoric rise to the top of the fashion world. By the mid-1970s, Betsey Johnson’s youthful demographic had matured and moved on next level she designed something innovative and popular styles. Alley Cat went out of business, and Johnson supported herself by designing children’s and maternity clothes on the side. In 1978, inspired by the punk movement, Johnson co-founded the Betsey Johnson label with ex-model Chantal Bacon. They collaborated to open Johnson’s first retail store in Manhattan’s trendy SoHo neighborhood. The Betsey Johnson brand has grown in size and reputation steadily since its inception. The company currently operates 65 stores worldwide and is one of the most well-known fashion brands.

Her Thoughts about her Designs

I was really inspired by my teenage girls and my grandchildren. Ella’s 15 and she is beyond into makeup. She has Cruella’s half-white, half-black hair. She’s a total little doll and beyond creative. She’s always drawing on her face, her eyes, her neck, everywhere. My other granddaughter, who’s 16, is the beauty that my daughter is. Very gorgeous, very beautiful. It’s like my brand, pretty and punk. “

Betsey Johnson made herself recognizable by her unique signature style and different designer clothing. She gave a remarkable sign and made her fashion empire. She showed the world how to be an independent and unique designer in the fashion industry and made stunning fashion statements.