The following illustration depicts the basic architecture of Flume. As shown in the illustration, data generators (such as Facebook, Twitter) generate data which gets collected by individual Flume agents running on them. Thereafter, a data collector (which is also an agent) collects the data from the agents which is aggregated and pushed into a centralized store such as HDFS or HBase.

An event is the basic unit of the data transported inside Flume. It contains a payload of byte array that is to be transported from the source to the destination accompanied by optional headers. A typical Flume event would have the following structure −

An agent is an independent daemon process (JVM) in Flume. It receives the data (events) from clients or other agents and forwards it to its next destination (sink or agent). Flume may have more than one agent. Following diagram represents a Flume Agent 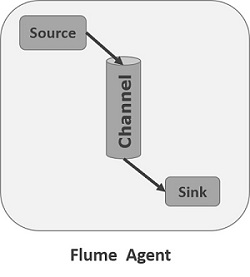 A source is the component of an Agent which receives data from the data generators and transfers it to one or more channels in the form of Flume events.

A channel is a transient store which receives the events from the source and buffers them till they are consumed by sinks. It acts as a bridge between the sources and the sinks.

These channels are fully transactional and they can work with any number of sources and sinks.

A sink stores the data into centralized stores like HBase and HDFS. It consumes the data (events) from the channels and delivers it to the destination. The destination of the sink might be another agent or the central stores.

Note − A flume agent can have multiple sources, sinks and channels. We have listed all the supported sources, sinks, channels in the Flume configuration chapter of this tutorial.

What we have discussed above are the primitive components of the agent. In addition to this, we have a few more components that play a vital role in transferring the events from the data generator to the centralized stores.

Interceptors are used to alter/inspect flume events which are transferred between source and channel.

These are used to determine which channel is to be opted to transfer the data in case of multiple channels. There are two types of channel selectors −

These are used to invoke a particular sink from the selected group of sinks. These are used to create failover paths for your sinks or load balance events across multiple sinks from a channel.