What is the origin of Dravidian Language and its prominence in today's world?

The Dravidian language family, which comprises 80 variations spoken by 220 million people across southern and central India and other parts of South Asia and the mother of 4 south Indian languages, is 4,500 years old. 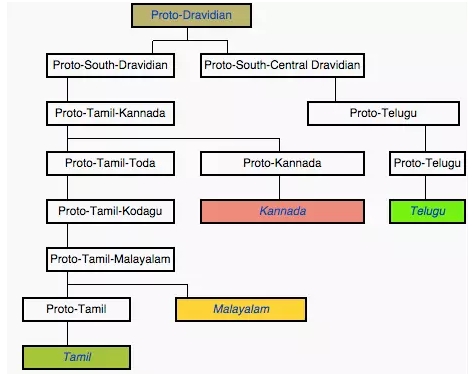 One of the largest language families in the world including 73 languages spoken by people of southern India, Sri Lanka, certain areas of Pakistan, and in Nepal. Due to emigration and business communities, it is also spread to Burma, Indonesia, Malaysia, Mauritius, and Guyana. Brahui is considered as the oldest of the Dravidian family and is spoken by 600,000 people in Pakistan, Afghanistan, and Iran.

According to historians, Dravidian speakers were present in the subcontinent before the Indo-Aryan speakers arrived (around 3,500 years ago). The major south Indian languages Kannada, Malayalam, Tamil, and Telugu are originated from Dravidian language itself. Out of which Tamil language transition from classical to the modern form is documented in inscriptions, poems, secular and religious texts. According to researchers and literary traditions spanning centuries, Tamil reaches back the farthest.

Archaeological inferences date back the diversification of Dravidian into Northern, Central, and Southern branches to 4,500 years, coinciding with the beginnings of cultural developments found in archaeological records. The Research centers in India are digging deep into the civilization advancements in India based on the evolution of these languages.

“We know rice was being cultivated in south India 10,000-11,000 years ago and an agrarian society calls for communication using at least basic sound icons to articulate thought processes,” said Ganesh N Devy, linguist, and founder-director of the Bhasha Research and Publication Centre, Vadodara.