What is the difference between DFA and NFA in compiler design?

Deterministic means that on each input there is one and only one state to which the automata can have the transition from its current state. In deterministic finite automata, the head can move only in one direction to scan the input tape symbols. But in the case of two-way, finite automata on scanning an input symbol the head of the tape may move in right or left from its current position.

There are two ways to represent Deterministic finite Automata −

It is a directed graph or flow chart having states and edges. A strong path through a transition graph is a sequence of edges forming a path starting at some start state and ending at a final state. 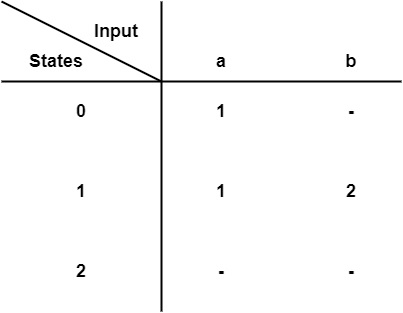 Non-Deterministic means that there can be several possible transitions. So, the output is non-deterministic for a given input. NFA can also be represented as a nondeterministic finite state machine. In NFA, the transitions are not specifically decided by their input symbol or source state. The reading of input symbols is not needed for each single state transition.

Example1− Draw NFA for the Regular Expression a(a + b) *ab

Let us see the comparison between DFA and NFA.