What is an admission control approach for congestion control?

The presence of congestion means the load is greater than the resources available over a network to handle. Generally, we will get an idea to reduce the congestion by trying to increase the resources or decrease the load, but it is not that much of a good idea.

There are some approaches for congestion control over a network which are usually applied on different time scales to either prevent congestion or react to it once it has occurred.

It is one of techniques that is widely used in virtual-circuit networks to keep congestion at bay. The idea is do not set up a new virtual circuit unless the network can carry the added traffic without becoming congested.

Admission control can also be combined with traffic aware routing by considering routes around traffic hotspots as part of the setup procedure.

Take two networks (a) A congestion network and (b) The portion of the network that is not congested. A virtual circuit A to B is also shown below − 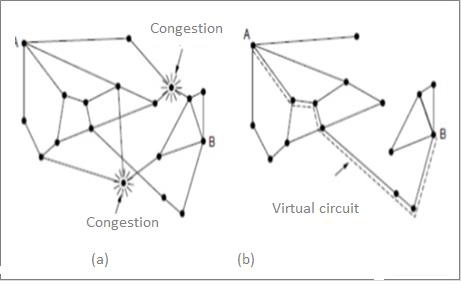 Step 2 − To avoid this situation, we can redraw the network as shown in figure (b), removing the congested routers and all of their lines.

Step 3 − The dashed line indicates a possible route for the virtual circuit that avoids the congested routers.