What is Congestion Control Algorithm?

Congestion causes choking of the communication medium. When too many packets are displayed in a method of the subnet, the subnet's performance degrades. Hence, a network's communication channel is called congested if packets are traversing the path and experience delays mainly over the path's propagation delay.

There is two congestion control algorithm which is as follows:

The leaky bucket algorithm discovers its use in the context of network traffic shaping or rate-limiting. The algorithm allows controlling the rate at which a record is injected into a network and managing burstiness in the data rate. 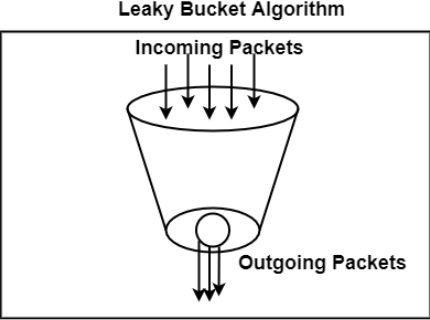 In this algorithm, a bucket with a volume of, say, b bytes and a hole in the Notes bottom is considered. If the bucket is null, it means b bytes are available as storage. A packet with a size smaller than b bytes arrives at the bucket and will forward it. If the packet's size increases by more than b bytes, it will either be discarded or queued. It is also considered that the bucket leaks through the hole in its bottom at a constant rate of r bytes per second.

The outflow is considered constant when there is any packet in the bucket and zero when it is empty. This defines that if data flows into the bucket faster than data flows out through the hole, the bucket overflows.

The leaky bucket algorithm has a rigid output design at the average rate independent of the bursty traffic. In some applications, when large bursts arrive, the output is allowed to speed up. This calls for a more flexible algorithm, preferably one that never loses information. Therefore, a token bucket algorithm finds its uses in network traffic shaping or rate-limiting.

It is a control algorithm that indicates when traffic should be sent. This order comes based on the display of tokens in the bucket. The bucket contains tokens. Each of the tokens defines a packet of predetermined size. Tokens in the bucket are deleted for the ability to share a packet.

When tokens are shown, a flow to transmit traffic appears in the display of tokens. No token means no flow sends its packets. Hence, a flow transfers traffic up to its peak burst rate in good tokens in the bucket.

Thus, the token bucket algorithm adds a token to the bucket each 1 / r seconds. The volume of the bucket is b tokens. When a token appears, and the bucket is complete, the token is discarded. If a packet of n bytes appears and n tokens are deleted from the bucket, the packet is forwarded to the network.

When a packet of n bytes appears but fewer than n tokens are available. No tokens are removed from the bucket in such a case, and the packet is considered non-conformant. The non-conformant packets can either be dropped or queued for subsequent transmission when sufficient tokens have accumulated in the bucket.

They can also be transmitted but marked as being non-conformant. The possibility is that they may be dropped subsequently if the network is overloaded.