What are the SONET/SDH standards in networking?

Let us understand what a SONET/SDH Transmission in computer networking is.

SONET stands for synchronous optical network. It offers cost effective transport both in the access area and core of the network.

The SONET/SDH transmission is diagrammatically represented as follows − 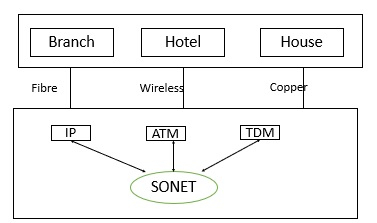 Its main role is that if some of the points in a network have not been working properly, the damaged sonnet has the capability to provide alternative points for the transport.

Multiplexing enables the physical medium to carry multiple signals. To place more than one cell on each link, it is some time slot. In SONET, multiplexing is not statistical.

It provides the ability to access traffic at a node without the need for complex packing and unpacking signals.

The SONET hierarchy is explained below in a stepwise manner −

Step 2 − It then adds overhead, so that signal and the quality of transmission are traceable.

Step 3 − The containers have two names depending on size −

Step 4 − SONET traffic is packaged in VT and transported in Synchronous signals.

Step 6 − SONET is an American National Standards Institution for NA, while synchronous Digital hierarchy (SDH) is for the rest of the world.

SONET is not just a simple replacement for SDA but a network in its own configuration, embedded switches and management.

The network architecture of SONET is diagrammatically given below − 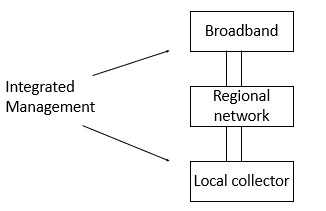 Collector rings provide the network interfaces for all access applications. Sometimes, SONET is a multiplexer in customer premises. It checks that the switch processing element is filled to maximum.

The features of SONET are given below −

The benefits of SONET are given below −

The main goals of SONET are given below −

The diagram given below represents the SONET structure − 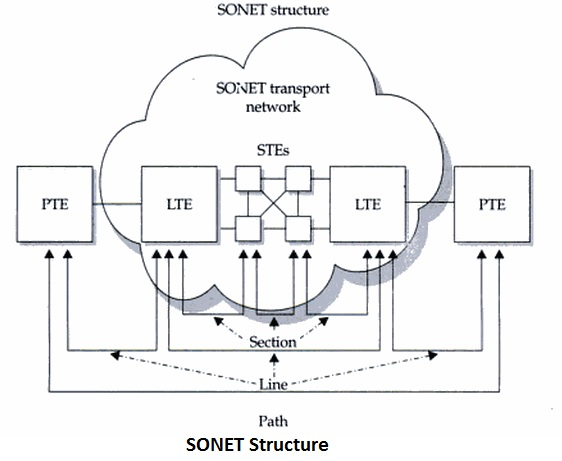