What are the following steps for the key generation of DES in information security?

Data Encryption Standard (DES) is a block cipher algorithm that creates plain text in blocks of 64 bits and transform them to ciphertext using keys of 48 bits. It is a symmetric key algorithm, which defines that the similar key is used for encrypting and decrypting information.

The key nature of DES is that the algorithms is fixed and is public data. However, the actual key used is shared secret among the originator and the receiver of a transmission.

Advances in DES contains lengthening a key to 128 bits and the multi-pass DES which includes multiple passes generally three of encryption and decryption using multiple keys.

DES was the outcome of a research project install by International Business Machines (IBM) Corporation in the late 1960’s which resulted in a cipher called a LUCIFER. In the initial 1970’s it was determined to degrade LUCIFER and a multiple innovation were introduced.

The algorithm implement 16 rounds of encryption and for each round, a unique key is produced. Before transforming to the steps, it is essential to understand that in plaintext the bits are labeled from 1 to 64 where 1 is the most significant bit and 64 is the least significant bit. The process of generating keys are as follows − 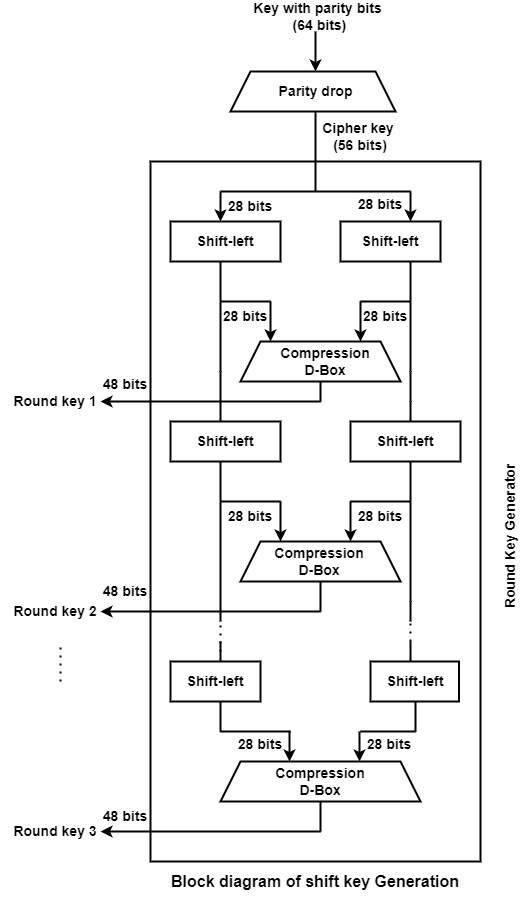