What are Parsing Techniques in Compiler Design? 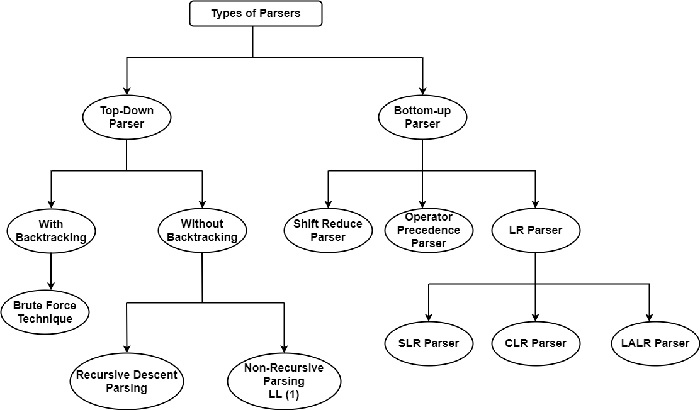 It generates the Parse Tree from root to leaves. In top-down parsing, the parsin begins from the start symbol and changes it into the input symbol.

An example of a Top-Down Parser is Predictive Parsers, Recursive Descent Parser.

It generates the Parse Tree from leaves to root for a given input string. In Grammar, the input string will be reduced to the starting symbol.

Operator Precedence Parser − The shift-reduce parsers can be generated by hand for a small class of grammars. These grammars have the property that no production on the right side is ϵ or has two adjacent non-terminals. Grammar with the latter property is known as operator grammar.

LR Parsers − The LR Parser is a shift-reduce parser that creates use of deterministic finite automata, identifying the set of all viable prefixes by reading the stack from bottom to top. It decides what handle, if any, is available.

There are three types of LR Parsers which are as follows −