web2py is defined as a free, open-source web framework for agile development which involves database-driven web applications; it is written in Python and programmable in Python. It is a full-stack framework; it consists of all the necessary components, a developer needs to build a fully functional web application.

Take a look at the workflow diagram given below. 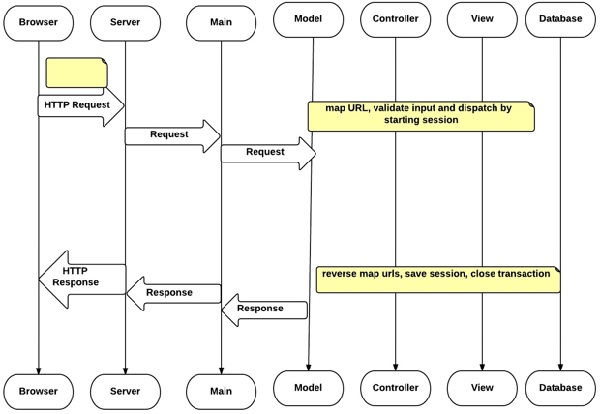 The workflow diagram is described below.

The model-view-controller representation of web2py is as follows −

The Model includes the logic of application data. It connects to the database as mentioned in the figure above. Consider SQLite is being used and is stored in storage.sqlite file with a table defined as employee. If the table does not exist, web2py helps by creating the respective table.

The program "default.py" is the Controller.

In web2py, URL mapping helps in accessing the functions and modules. For the above example, the Controller contains a single function (or "action") called employees.

The action taken by the Controller returns a string or a Python dictionary, which is a combination of key and value including a local set of variables.

For the given example, View displays the output after the associated controller function is executed.

The purpose of this View is to render the variables in the dictionary, which is in the form of HTML. The View file is written in HTML, but it embeds Python code with the help of {{ and }} delimiters.

The code embedded into HTML consists of Python code in the dictionary.

web2py comes in binary packages for all the major operating systems like Windows, UNIX and Mac OS X.

It is easy to install web2py because −