Virtualization, at least at the server level, has been in use for some time. Since, the concept has expanded to the User, Application, Network, Security, Storage, and of course to Desktop Virtualization (VDI) as well. Therefore, to roll out in all these concepts, we have to prepare an infrastructure before, which is divided in some key components.

The First one is Hypervisor and we have discussed it in the earlier chapters. Some important specifications needed for this job are – Processors, Memory and Networking Modes, etc.

VDI can be very resource intensive – this includes traffic over the wire. Having a good core-switching infrastructure will help alleviate this pain by allowing the administrators to create certain rules and policies revolving around traffic flow.

Setting up QoS metrics for VDI-specific traffic can help remove congestion and ensure that the right traffic has the proper amount of priority. As for the traffic that is leaving the data center, knowing where the user is located and optimizing their experience based on certain criteria, becomes very important.

To prevent boot and processing storms, organizations must look at IOPS requirements for their images. To alleviate processing pains, administrators can look at Flash Technologies (NetApp, Fusion-IO, XtremIO) or SSD Technologies (Violin, Nimbus) to help offload that kind of workload. Furthermore, intermediary platforms like Atlantis ILIO run on top of a virtual machine that utilizes massive amounts of RAM as the key storage repository.

File systems are varied depending on their functions. Some of the most common ones are listed below −

Let us discuss each of these in detail.

VMFS is a file system proprietary to VMware. It is a clustered file system and it can be mounted on multiple servers simultaneously. This helps every host to connect to the any file system at the same time, which is expected from a proprietary system preferred by VMware. Most of the VMware hypervisors will work with other file systems, but the default choice and the preferred choice is VMFS.

NFS is a system that was originally developed by Sun, but is now an Open Standard system. Used commonly in the UNIX and Linux world. It is a distributed file system. It can be mounted on one server and the network will be used to share information to multiple machines.

NTFS is the standard file structure for the Windows NT operating system. It is used for retrieving and storing files on the hard disk.

RDM helps any file in a virtual machine file system to act as a proxy for any raw device. It allows a VM to access as well as use the storage device.

Choosing Between Different Types of Storage

All the storage devices are divided into three categories, which are −

For example – A server that has local hard discs on it. That type of hypervisor can hold not more that 10-20 VM machines. A sample device can be a HP Server with eight local hard discs as shown in the following illustration.

NAS is "Any server that shares its own storage with others on the network and acts as a file server in the simplest form". Network Attached Storage shares files over the network. Some of the most significant protocols used are SMB, NFS, CIFS, and TCP/IP. When you access files on a file server on your windows system, it is NAS

NAS will be using an Ethernet connection for sharing files over the network. The NAS device will have an IP address and then will be accessible over the network through that IP address. Biggest providers of NAS are QNAP and Lenovo. 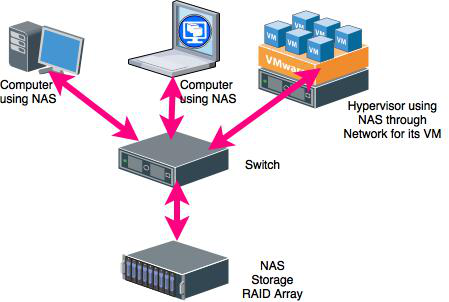 SANs allow multiple servers to share a pool of storage; making it appear to the server as if it were local or directly attached storage. A dedicated networking standard, Fibre Channel, has been developed to allow blocks to be moved between servers and storage at high speed. It uses dedicated switches and a fiber-based cabling system, which separates it from the day-to-day traffic traversing the busy enterprise network. While the well-established SCSI protocol enables communication between the servers’ host bus adaptors and the disk system. 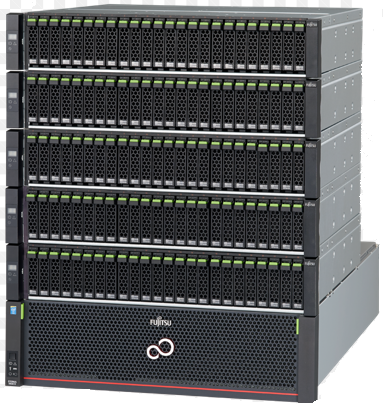 The following illustration shows how a SAN switch operates. 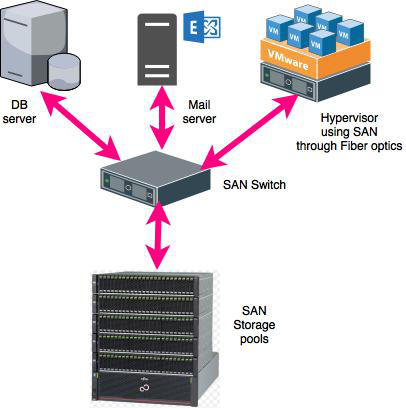