The Type System represents the different types of values supported by the language. The Type System checks the validity of the supplied values, before they are stored or manipulated by the program. This ensures that the code behaves as expected. The Type System further allows for richer code hinting and automated documentation too.

TypeScript provides data types as a part of its optional Type System. The data type classification is as given below − 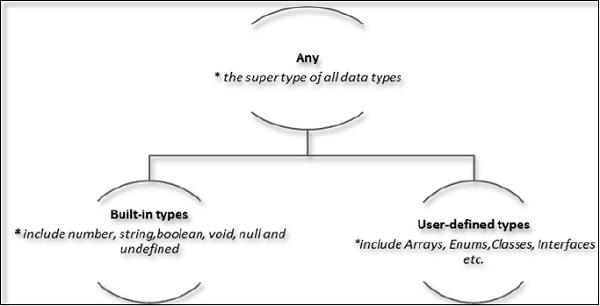 The any data type is the super type of all types in TypeScript. It denotes a dynamic type. Using the any type is equivalent to opting out of type checking for a variable.

The following table illustrates all the built-in types in TypeScript −

Note − There is no integer type in TypeScript and JavaScript.

Null and undefined ─ Are they the same?

The null and the undefined datatypes are often a source of confusion. The null and undefined cannot be used to reference the data type of a variable. They can only be assigned as values to a variable.

User-defined types include Enumerations (enums), classes, interfaces, arrays, and tuple. These are discussed in detail in the later chapters.