The object or solid shape is the matter of geometrical description of the space that has been acquired by that object and is denoted by its external boundaries. Due to the application of physical forces, the shape of the solid changes and this phenomenon is denoted as the solid deformation.

Objects that are under certain external forces undergo deformation by twisting, pulling apart, and cracking, compressing, and squashing. In Physics, the process of deformation of objects, or solids can be described by two terms: Strain and Stress.

The relation between these Strain and Stress can be written in the form:

If the shape, length, or volume of a solid material gets changed due to the application of external forces, mechanical forces, or even physio-chemical forces, then this phenomenon is considered to be the deformation of solid (Xu et al. 2017). The solid materials’ shape is determined by the geometrical description of the scope that the solid has occupied and is considered its external boundaries. 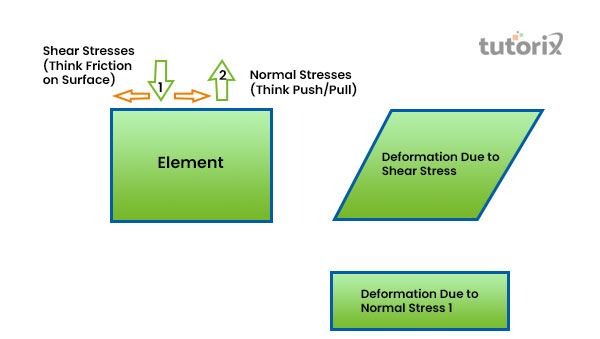 Elastic and plastic deformation of solid

Stress is the physical quantity that defines the external pressures magnitude, which is the main cause of deformation. On the other side, Strain deals with the measurement of deformation degrees. The relation between Strain and Stress can be stated as,

Elastic modulus is determined as the ratio between this strain and stress and describes a certain amount of pressure exerted upon per deformation unit. 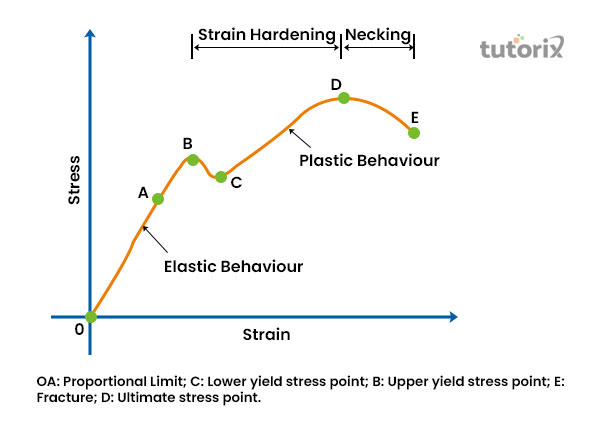 There are several types of stresses such as shear stress, bulk stress, tensile stress, and compressive stress. Strain deals with an explanation of the fractional change taking place in the solid materials like in their geometry, volume, or length and is considered as the dimensionless number.

Deformation of solid is denoted as the change of shape, volume, length, and other properties of the solid materials after the application of mechanical, physical, or physio-chemical forces. The solid deformation process is defined by two terms in physics those are stress and strain (Xu et al. 2017).

Q1. What do you mean by deformation of metals?

If the metal body changes its shape, size, or volume, after a certain physical force is exerted on it then it is determined as the metal deformation. This deformation can be caused by external forces, by mechanical actions, or even by physio-chemical processes.

Q2. What is length deformation?

The modulus of the length deformation is called the Young’s Modulus. It is denoted as the slope of the line arranged for an elastic region of the strain and stress graph. It generally deals with the measurement of how much the material has been stretched.

Q3. What are restoring and deforming forces?

Q4. What is the use of Stress and Strain curve?

Stress is a deforming force that an object experiences per unit area. Strain is the change in quantity per unit of that object's actual value. The Stress and Strain curve, deals with the materials’ behaviour when an external pressure is mostly applied to it and changes in its volume, shape, or length occur.

Gcekjr (2020). About Deformation Behaviour Of Materials. Retrieved from: www.gcekjr.ac.in [Retrieved on: 17th June 2022]