For scootering, a scooter is the primary requirement which includes bars, forks, brakes, wheels, headset, pegs, and decks.

Handle bars which are essential for a scooter are usually made up of 6061 aluminium or chromyl. Now-a-days various designs of bars are used which includes “T” bars or standard RAD “OG” bars. Besides these, there are also bars of other variations are used with different angle measurements and styles.

Generally maximum forks are thread less. Thread less means there is a compression system which is used to hold the scooter bars and deck to the fork. But threaded forks have not vanished from the market. They are still available. But threaded forks make the rider’s scooter wobbly and it is also not as strong as a thread less fork scooter. 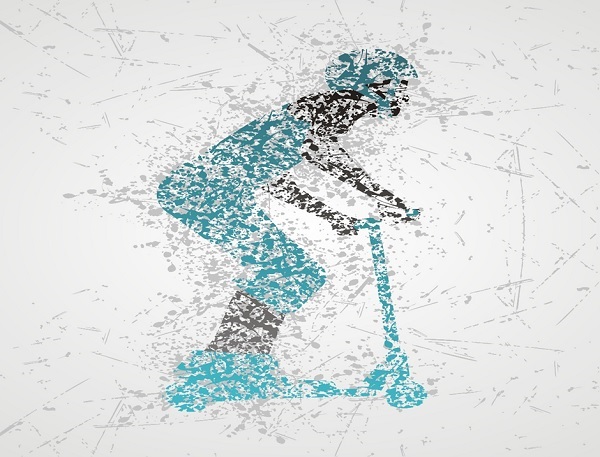 Flex fenders are the most popular among the brakes that are used in scooters. Beside flex fenders, there are also many brakes available in market. During race, the rider can depress it against the rear wheel which slows down the speed of the scooter.

Wheels of early stage scooters were made of plastic at core and urethane at outside which were unreliable and it often broke or cracked. As we know necessity is mother of invention so to overcome this, researchers developed metal-core wheels which are highly reliable and are greatly used by today’s riders.

The metal core which is used in today’s wheels are manufactured with a machined aluminium core and with a durable urethane tyre. The companies that produce metalcore wheels are Fasen, RILLA, Proto, Envy scooters, Madd gear, Root industries, Havoc, River wheel co and Eagle Sport wheels. 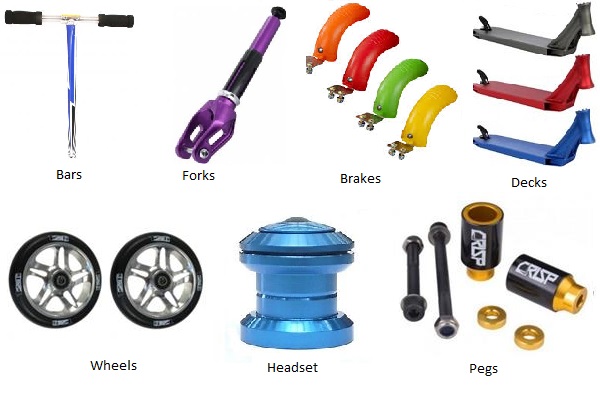 Headsets on freestyle scooters are similar to those on BMX bikes. The scooters used in scootering sports are designed to fit a 1 1/8” sized headset. For threaded forks, a threaded headset is used.

There are very small numbers of brands who are specialized in making pegs. They make pegs by using both alloy and chromyl. The name of these brands is 81 customs, Tilt, District, Havoc and Ethic. For stalling on ledges and other obstacles, scooter pegs are used. Scooter pegs appearance resembles a smaller version of BMX pegs

Initially, first razor ‘A’ decks were being used by the riders, since then decks of free style scooters came a long way. There was folding mechanism but now the scooter decks are usually constructed without any folding mechanism. Most of the modern day decks consist of two or three pieces of metal which are welded or bolted together.