You need to create different users and groups in the Windows Platform to run your SAP system securely. To ease the user management task, it is suggested to add all WIN NT users to user group with correct access rights at OS level. In the Window Operating System, there are different group levels − 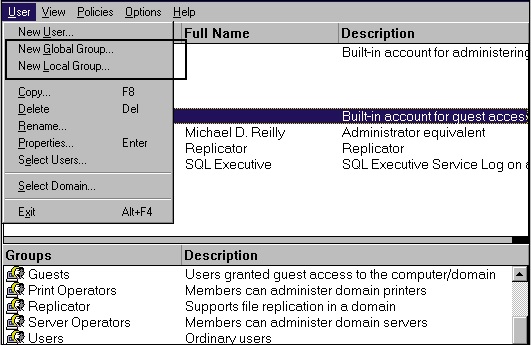 Global Groups in WIN are available at domain level and can be used to assign users from multiple servers. Global groups are available to all servers in one domain.

You can select the name of Global Groups as per your convenience. However, it is recommended to use naming conventions as per the SAP R/3 System Installation, which is the standard Global Group for SAP System Administrators and it is defined as SAP_<SID>_GlobalAdmin.

In the Window Platform, there are various commonly created Global Groups that can be used to run a SAP System −

Local groups in Windows Platform are limited to one server in a domain. During the installation, rights are assigned to individual users and not groups. However, it is recommended that you assign access rights to local groups instead of single users.

Local groups are used to increase the security of the Windows environment in shared domains. You can further assign global users and global groups to a local group. You can create a local group with any name, but it is recommended that you use the local group name as: SAP_<SID>_LocalAdmin.

You can define various relations between users, local groups and global groups −

Standard Users in a Windows Platform

Also, note that the Administrator and Guest users are created during the installation process and are used to perform Window specific tasks. All these users should be protected in a Window platform.