A Rainbow is the outcome of reflection and refraction of light which includes a transformation in direction of waves. Rainbows are caused by different conditions of the atmosphere and the phenomenon of sunlight. Apart from the physical concepts, the rainbow is demonstrated as the symbol of hope in distinct cultures. In many cultures, people often consider the rainbow as an inspiration, good fortune and promise.

Rainbow represents a personal meaning in everyone's life which represents inclusion and diversity and the facts of embracing friendship and love. A Rainbow is not considered a matter state and it happens by reflection from the inner surface. Rainbow has the simple cause where raindrops perform like prisms to reflect the light spectrum in a bow shape.

Rainbow is referred to as the well-known effects of optics that are concerned with weather and is one of the magnificent masterpieces of nature. Rainbow resulted from the sunlight refraction from falling droplets of water along with the light reflection from the back of water drops (Skelton et al. 2018).

Rainbow is demonstrated as the remarkable light dispersion and proof that the visible ray of light is tranquil of the wavelength's spectrum. 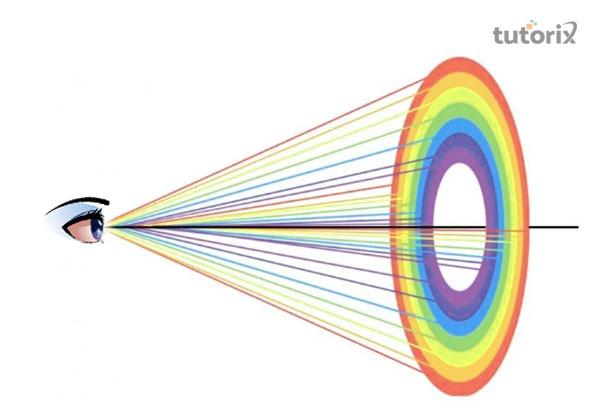 Each wavelength is concerned with a differentiated colour. It is known that a Rainbow comprises seven colours which are familiar with the term "VIBGYOR". VIBGYOR in a rainbow represents violet, indigo, blue, green, yellow, orange and red. Rainbows do not get formed due to diffraction as it doesn't play a crucial role in their formation.

How can a rainbow be made?

The red light emerging from the upper part of the rainbow reflects on the eyes enabling the individual to view it. Granulated sugar, straw, six glasses, a spoon for measurement and food colouring liquid are required elements to make a rainbow. Water and sunlight are the materials and prisms and whiteboards are the tools that are required for making a rainbow (Al Jabbar et al. 2020).

Light properties that are responsible for rainbows are dispersion, total internal reflection and refraction. The sequence of rainbow colours is evaluated by picturing a ray diagram of the sunlight refraction inside droplets of water. 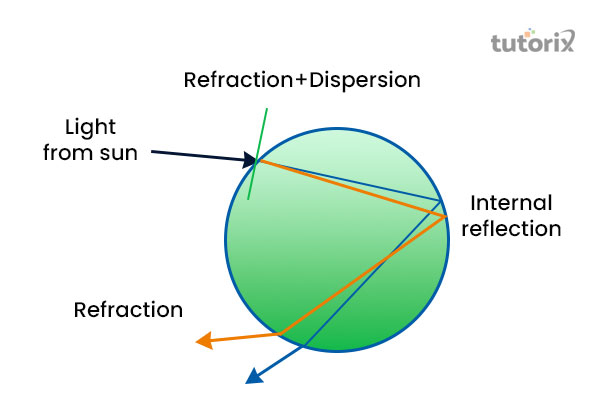 Figure 2: Properties of light responsible for the rainbow

From the properties of light, it is demonstrated that the spectrum gets separated in the creation of a rainbow. It is also demonstrated that the Red colour in the rainbow has the largest wavelength of the displayed light which is around 650 nanometres (Birriel & Birriel, 2020). Basically, a rainbow represents its light when the light leaves the droplet.

How is the rainbow created?

A single droplet is considered in the region of red colour and a white light ray occurs on the surface to reflect light in the outer boundary and refract some. As opined by Lu et al. (2021), the light that is reflected is represented as white and goes away from the eyes. This is ignored as the light does not assist in forming rainbows. White light is segregated into constituent seven colours when the white light passes through the prism (Fabro, Meng & Chronopoulos, 2021). The water droplets during the rainfall act exactly the same as prisms. The water droplets disseminate the white sunlight at an entrance point thus scattered light falls onto the droplet side. 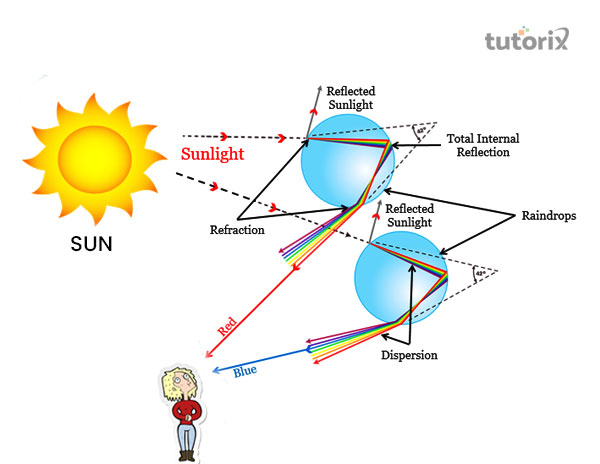 Each colour of the visible light is refracted by distinct angles. It is often observed that the ray of light gets scattered in a similar medium. In this phase, the passing of light from drops of water to the air cannot be observed. The light bends away from the normal when the light passes from a deeper to a rarer medium (Fan et al. 2018). The refracted ray of the rainbow remains in a proceeding medium. Similar things emerged with the droplets of water as the incidence angle at the surface area for every coloured light is bent in a similar medium (Son et al. 2021).

The distinct coloured light rays are at the "air-water interface'' for the next time. Internal reflection does not happen and the rays are bent in the air but dissected by some amount. It is because the refraction made a huge gap between these colours. This is the process through which a rainbow is formed.

The most remarkable type of rainbow is created when the ray of light from the sun strikes the raindrops in front of the observer at a defined angle. Rainbows can be visible through fog, waterfalls, and sea spray. It is often demonstrated as an optical illusion which does not exist at particular points. Rainbow appearance relies on the standing position of the human body and sky. The Centre of the primary rainbow is referred to as the antisolar point where the point of the image is exactly different from the sun.

Q1. Why is Indigo not considered the rainbow colour?

Q2. Why does the rainbow seem to be curved?

The half-circle results because there are suspended water droplets in the atmosphere that are capable of concentrating the dispersion of light at deviated angles of 40 to 42 degrees. The dispersion is relative to the actual way of light from the sun.

Q3. What demonstrates the rainbow's phenomenon?

A Rainbow is determined as a meteorological phenomenon that occurs by refraction, reflection and dispersion of light. A Rainbow caused by the light appears in the sky section directly opposite the sun.

Q4. What is the full circle rainbow known as?

The glory is named after the full circle rainbow which according to NASA ''seems to be circular, small rainbow or interlocking colours''. The glory is reflected on South Africa's plane.