Installing, starting up and configuring

As described, “the start small, finish big, stay finished framework”, Pyramid is much like Flask which takes very little effort to install and run. In fact, you’ll recognize that some of the patterns are similar to Flask once you start building this application.

Following are the steps to create pyramid framework environment −

Once everything is done as mentioned above, your directory structure will be as shown below − 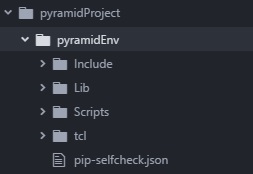 And the pyramid version installed in the system is given below −

The Pyramid framework is based on below core concepts −

The following are the features of the Pyramid framework −

In pyramid, we can generate URLs for routes, resources and static assets. It is easy and flexible to work with URL generation APIs. By generating URLs through pyramid’s various APIs, users can change the configuration arbitrarily without much worry of breaking a link with any of your web pages.

So in short, URL in pyramid −

When you map your views onto your URL dispatch or python code, there can be any kind of call. Views can be a function declaration or an instance, it can be used as a view in the pyramid.

Some important points about Views are given below −

Pyramid is designed with extensibility in mind. So if a pyramid developer is keeping in mind certain constraints while building an application, a third party should be able to change the application’s behaviour without needing to modify its source code. The behaviour of a pyramid application that obeys certain constraints can be overridden or extended without any modification. It is designed for flexible deployments to multiple environments (No Singletons). Pyramid has “Tweens” middleware support (WSGI middle ware, but runs in the context of Pyramid itself).

The simplest program we can think after installing pyramid framework to check if everything is working fine, is to run a simple “Hello, World” or “Hello, Pyramid” program.

Below is my pyramid “Hello, Pyramid” program on 8000 port number − 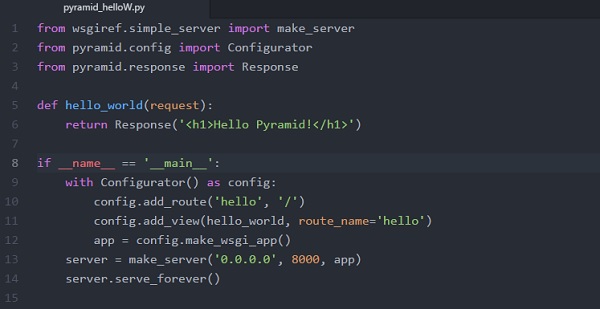 Above simple example is easy to run. Save this as app.py (In this, we have given the name pyramid_helloW.py).

Next, open http://localhost:8000/ in a browser, and you will see the Hello, Pyramid! Message as follows −

The following is the explanation for above code −

At the head of the file, we have import statements. The first line imports make_server function, which can create a simple web server when it is passed to an application. The second and third line import the configuration and Response function from pyramid. These functions are used to configure details and set parameters for the application and respond to requests, respectively.

Now we have a function definition called hello_world. Implement view code that generates the response. A function that fulfils the requirement of a view is responsible for rendering the text that will be passed back to the requesting entity. In the above case, the function, when called, uses the Response function we imported earlier. This passes back a value that should be given to the client.

if __name__ == ‘__main__’: Python is saying, “Start here when running from the command line”, rather than when this module is imported.

In line no. 9, we create a variable called config out of the object created by the configurator function that we imported at the top of the program. Line 10 and 11 call the add_route and add_view method of this object. This method is used to define a view that can be used by the application. As we can see, we pass the hello_world function we defined earlier. This is where that function is actually incorporated as a view.

In this, we actually create the WSGI application by calling the make_wsgi_app method of the config object. This uses the object’s attributes, such as the view we added, to create an application. This application is then passed to the make_server function we imported in order to create an object that can launch a web server to serve our application. The last line launches this server.

Our hello world application is one of the simplest and easiest possible pyramid applications, configured “imperatively”. It is imperative because the full power of Python is available to us as we perform configuration tasks.