A Primer on Network Communication

We have always heard that to perform penetration testing, a pentester must be aware about basic networking concepts like IP addresses, classful subnetting, classless subnetting, ports and broadcasting networks. The very first reason is that the activities like which hosts are live in the approved scope and what services, ports and features they have open and responsive will determine what kind of activities an assessor is going to perform in penetration testing. The environment keeps changing and systems are often reallocated. Hence, it is quite possible that old vulnerabilities may crop up again and without the good knowledge of scanning a network, it may happen that the initial scans have to be redone. In our subsequent sections, we will discuss the basics of network communication.

Reference Model offers a means of standardization, which is acceptable worldwide since people using the computer network are located over a wide physical range and their network devices might have heterogeneous architecture. In order to provide communication among heterogeneous devices, we need a standardized model, i.e., a reference model, which would provide us with a way these devices can communicate.

The Open System Interface was designed by the International organization of Standardization (ISO) and therefore, it is also referred to as the ISO-OSI Model.

The OSI model consists of seven layers as shown in the following diagram. Each layer has a specific function, however each layer provides services to the layer above. 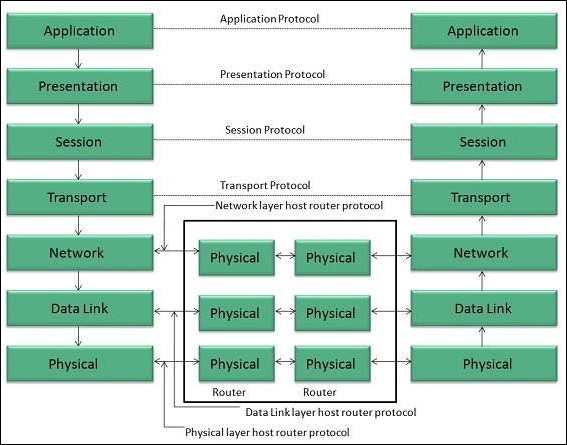 The Physical layer is responsible for the following activities −

The Transmission Control Protocol and Internet Protocol (TCP/IP) model is a practical model and is used in the Internet. 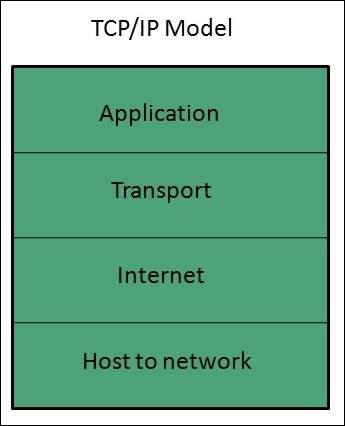 This is the lowest layer in the TCP/IP model. The host has to connect to network using some protocol, so that it can send IP packets over it. This protocol varies from host to host and network to network.

The different protocols used in this layer are −

Following are some useful architectures, which are used in network communication −

An engineer named Robert Metcalfe first invented Ethernet network, defined under IEEE standard 802.3, in 1973. It was first used to interconnect and send data between workstation and printer. More than 80% of the LANs use Ethernet standard for its speed, lower cost and ease of installation. On the other side, if we talk about frame then data travels from host to host in the way. A frame is constituted by various components like MAC address, IP header, start and end delimiter, etc.

The Ethernet frame starts with Preamble and SFD. The Ethernet header contains both Source and Destination MAC address, after which the payload of frame is present. The last field is CRC, which is used to detect the error. The basic Ethernet frame structure is defined in the IEEE 802.3 standard, which is explained as below −

An Ethernet frame is preceded by a preamble, 7 bytes of size, which informs the receiving system that a frame is starting and allows sender as well as receiver to establish bit synchronization.

This is a 1-byte field used to signify that the Destination MAC address field begins with the next byte. Sometimes the SFD field is considered to be the part of Preamble. That is why preamble is considered 8 bytes in many places.

The description of the fields, which are different from IEEE 802.3 Ethernet frame, is as follows −

DSAP is a 1-byte long field that represents the logical addresses of the network layer entity intended to receive the message.

SSAP is a 1-byte long field that represents the logical address of the network layer entity that has created the message.

This is a 1-byte control field.

Internet Protocol is one of the major protocols in the TCP/IP protocols suite. This protocol works at the network layer of the OSI model and at the Internet layer of the TCP/IP model. Thus, this protocol has the responsibility of identifying hosts based upon their logical addresses and to route data among them over the underlying network. IP provides a mechanism to uniquely identify hosts by an IP addressing scheme. IP uses best effort delivery, i.e., it does not guarantee that packets would be delivered to the destined host, but it will do its best to reach the destination.

In our subsequent sections, we will learn about the two different versions of IP.

This is the Internet Protocol version 4, which uses 32-bit logical address. Following is the diagram of IPv4 header along with the description of fields − 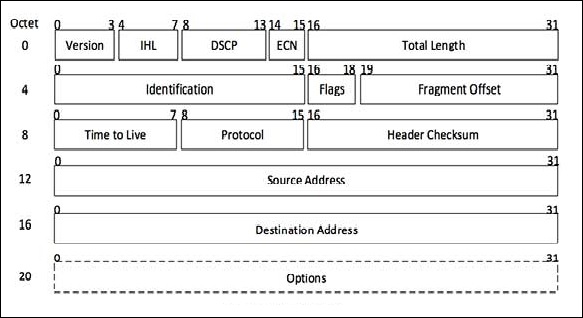 This is the version of the Internet Protocol used; for example, IPv4.

Differentiated Services Code Point; this is the Type of Service.

Explicit Congestion Notification; it carries information about the congestion seen in the route.

The length of the entire IP Packet (including IP header and IP Payload).

If the IP packet is fragmented during the transmission, all the fragments contain the same identification number.

As required by the network resources, if the IP Packet is too large to handle, these ‘flags’ tell if they can be fragmented or not. In this 3-bit flag, the MSB is always set to ‘0’.

This offset tells the exact position of the fragment in the original IP Packet.

To avoid looping in the network, every packet is sent with some TTL value set, which tells the network how many routers (hops) this packet can cross. At each hop, its value is decremented by one and when the value reaches zero, the packet is discarded.

Tells the Network layer at the destination host, to which Protocol this packet belongs, i.e., the next level Protocol. For example, the protocol number of ICMP is 1, TCP is 6 and UDP is 17.

This field is used to keep checksum value of entire header, which is then used to check if the packet is received error-free.

32-bit address of the Sender (or source) of the packet.

32-bit address of the Receiver (or destination) of the packet.

This is an optional field, which is used if the value of IHL is greater than 5. These options may contain values for options such as Security, Record Route, Time Stamp, etc.

If you want to study IPv4 in detail, please refer to this link - www.tutorialspoint.com/ipv4/index.htm

The Internet Protocol version 6 is the most recent communications protocol, which as its predecessor IPv4 works on the Network Layer (Layer-3). Along with its offering of an enormous amount of logical address space, this protocol has ample features , which address the shortcoming of IPv4. Following is the diagram of IPv4 header along with the description of fields −

It represents the version of Internet Protocol — 0110.

This label is used to maintain the sequential flow of the packets belonging to a communication. The source labels the sequence to help the router identify that a particular packet belongs to a specific flow of information. This field helps avoid re-ordering of data packets. It is designed for streaming/real-time media.

This field is used to stop packet to loop in the network infinitely. This is same as TTL in IPv4. The value of Hop Limit field is decremented by 1 as it passes a link (router/hop). When the field reaches 0, the packet is discarded.

This field indicates the address of originator of the packet.

This field provides the address of the intended recipient of the packet.

If you want to study IPv6 in detail, please refer to this link — www.tutorialspoint.com/ipv6/index.htm

First of all the system that is trying to initiate a connection starts with a packet that has the SYN flag set.

Now, in this step the target system returns a packet with SYN and ACK flag sets.

At last, the initiating system will return a packet to the original target system with ACK flag set.

It identifies the source port of the application process on the sending device.

It identifies the destination port of the application process on the receiving device.

The sequence number of data bytes of a segment in a session.

When ACK flag is set, this number contains the next sequence number of the data byte expected and works as an acknowledgment of the previous data received.

This field implies both, the size of the TCP header (32-bit words) and the offset of data in the current packet in the whole TCP segment.

Reserved for future use and set to zero by default.

This field is used for flow control between two stations and indicates the amount of buffer (in bytes) the receiver has allocated for a segment, i.e., how much data is the receiver expecting.

If you want to study TCP in detail, please refer to this link — https://www.tutorialspoint.com/data_communication_computer_network/transmission_control_protocol.htm

UDP is a simple connectionless protocol unlike TCP, a connection-oriented protocol. It involves minimum amount of communication mechanism. In UDP, the receiver does not generate an acknowledgment of packet received and in turn, the sender does not wait for any acknowledgment of the packet sent. This shortcoming makes this protocol unreliable as well as easier on processing. Following is the diagram of the UDP header along with the description of fields −

This 16-bits information is used to identify the source port of the packet.

This 16-bits information is used to identify the application level service on the destination machine.

The length field specifies the entire length of the UDP packet (including header). It is a 16-bits field and the minimum value is 8-byte, i.e., the size of the UDP header itself.

This field stores the checksum value generated by the sender before sending. IPv4 has this field as optional so when checksum field does not contain any value, it is made 0 and all its bits are set to zero.

To study TCP in detail, please refer to this link — User Datagram Protocol